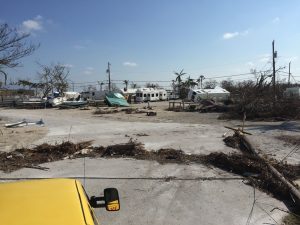 When Hurricane Irma slammed into the Florida Keys on Sept. 10, the eye of the storm passed almost directly over the Sugarloaf Key/Key West Kampgrounds of America (KOA) Holiday, ravaging one of the island jewels in the 500-campground KOA system.

“The Sugarloaf Key/Key West KOA Holiday is in really rough shape,” said Terry Shade, vice president of company owned properties for KOA. “We just recently got the utilities back on the property, but the damage is much worse than we thought even a few weeks ago.”

According to a press release, Shade said now that power has been restored, workers have begun drying out the water-damaged buildings.

“There is, of course, a lot of wind damage, but the water damage is almost more of an immediate concern because of the mold it can cause in that climate,” he said.

Rental Cabins on the property will likely all have to be replaced, he said.

Shade said the campground will be closed to the public until at least Jan. 1, 2018.

“The only people on the property before Jan. 1 will be KOA employees and contractors,” he said. “They will be working to properly dry out any buildings that can be salvaged, and cleaning and sanitizing the property while doing the necessary demolition so that we can rebuild.”

The Sugarloaf Key/Key West KOA Holiday will likely be open to guests on a very limited basis between January 1 and March 31, Shade said.

“Any reservations during that time will be reviewed on a case-by-case basis,” he said. “There will be a lot of work going on at the campground during that time and we’ll have to ensure that anyone allowed to stay during that period can be easily moved as needed.”

Shade said the campground will resemble a “work camp”, while the bulk of the rebuilding efforts are underway from Jan. 1 to Oct. 15, 2018.

KOA staff is currently contacting campers with reservations at the campground to apprise them of the situation and inform them that they may have to make alternate plans during the reconstruction period.

“The focus during the reconstruction period at Sugarloaf Key/Key West KOA Holiday will be on rebuilding campsites and structures that were damaged by the storm,” he continued. “We anticipate that about 80% of the work will be completed by Oct. 15, 2018, with only minor work still underway, so the impact on guests would be minimal. After Oct. 15, I think the Sugarloaf Key/Key West KOA Holiday will again be providing a KOA camping experience.”

Shade said 100% of the repair & rebuilding work triggered by Hurricane Irma should be completed by March 31, 2019.

The Naples/Marco Island KOA Holiday in Florida was also damaged by the hurricane, with several deluxe cabins damaged, but Shade said that the campground is open and operating, and any needed repairs should not impact campers or upcoming reservations.

Company-owned KOAs at St. Petersburg/Madeira Beach KOA Holiday and Okeechobee KOA also received some slight damage, but both campgrounds are open and operating and there should be no interruptions to service to campers.

All KOA franchised campgrounds in Florida are open and operating as usual.