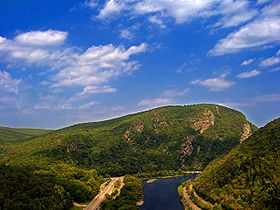 The Delaware Water Gap from Kittatinny. Interstate-80 is on the left. Photo courtesy of Wikipedia.

Less than two weeks after the National Park Service gave its approval for new 500-kilovolt electric lines to cross the Delaware Water Gap National Recreation Area, 10 environmental groups on Monday (Oct. 15) filed a challenge to the decision in Federal District Court and are seeking to have the entire environmental study set aside.

Among the 11 causes of action, the lawsuit alleges that the National Park Service was influenced by the Obama Administration, which placed the project on a fast-track that “placed undue pressure on rapid approval” of the project even before the environmental study was done, the New Jersey Herald reported.

The National Park Service and Department of the Interior “really overstepped their authority,” said Hannah Chang of Earth Justice, one of the lead attorneys in the lawsuit. “The Organic Act carries with it a flat-out mandate and their reasoning for going around the act seems to be flat-out wrong.”