Summer Busy For Ariz. Owners, Fall Should Be Too 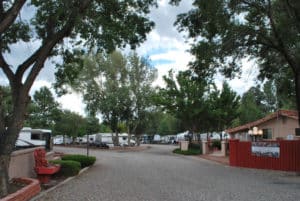 J & H RV Park in Flagstaff, Ariz., is one of many northern Arizona parks that experienced a busy summer.

Campgrounds across northern Arizona have experienced another busy summer and many expect high occupancy rates to continue well into September and October, according to officials from the Arizona Association of RV Parks and Campgrounds (Arizona ARVC).

“This has been another great summer for northern Arizona’s tourism business,” said Jo Ann Mickelson, executive director of the Arizona ARVC, which hosts GoCampingInArizona.com, the statewide travel planning website.

Mickelson bases her comments on information she has received from other Arizona park owners as well as her personal experience at J & H RV Park in Flagstaff, which she co-owns and operates with her husband, Harvey. J & H RV Park’s year-to-date business levels are just slightly below last year’s figures, which were the strongest in the park’s 37-year-history.

“We’ve been busy,” Mickelson said, adding that September is also proving to be exceptionally busy so far. “There are so many RVs and people up here. It’s looking very promising.”

Clint Bell, whose family owns and operates the Flagstaff Kampgrounds of America (KOA), as well as the Williams/Exit 167/Circle Pines KOA Holiday and the Grand Canyon/Williams KOA Journey, said his parks’ business levels were “on par with last year’s performance, which means traffic is strong in Northern Arizona.”

Some RV parks said their overnight traffic had increased, including Meteor Crater RV Park in Winslow, which saw its overnight business rise as a result of the installation of a new 4-D experience attraction at Meteor Crater called “Collision,” which features a theater with moving chairs and other special effects.

Paula Hamby, who co-owns and operates the OK RV Park in Holbrook, with her husband, Mike, said September and October are typically among her busiest months of the year because of travelers crossing northern Arizona enroute to the annual Albuquerque International Balloon Fiesta, slated for Oct. 5-13.

Holbrook was also the site of the 88th annual Navajo County Fair & Rodeo, Sept. 11-14, which drew large numbers of attendees.

Snowbirds also return to the southern deserts in the fall, which brings additional business to her park, she said.

While OK RV Park is not a destination park, it offers 75 overnight campsites for overnight travelers and provides referral assistance to RVers who need help with repairs to their vehicles while making cross country trips, Hamby said.

“We are getting full for October. We still have sites available. But it’s getting busy,” Hamby said, adding that more and more travelers are using her park as a base camp to explore Northern Arizona. “We have had more and more people that want to stay a week or a month. They want to really cover the area. They like our monthly prices.”

Hamby’s guests this month included travelers on a Rotel bus tour. Rotel buses are custom-built buses that function like mini hotels with beds for 20 or more guests. Rotel bus tours provide their own chefs and have the equipment needed to prepare food for their guests.