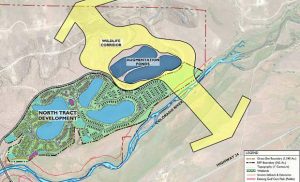 A small portion of the site of the new Sun Communitites development in Granby, Colo.

Granby, Colo.’s ongoing negotiations with luxury RV resort developer Sun Communities, which plans to construct a large RV resort on the Shorefox property north of downtown Granby, moved ahead Tuesday (Sept. 26) evening with the Granby Board of Trustees voting unanimously to approve preliminary planning documents related to the development.

According to Sky-Hi News, Sun Communities will still be required to bring a completed set of planning documents, outlining the full scope of their development, before the board for final approval, anticipated sometime early next year.

Sun Communities’ development will be broken down into two areas, one north of the Colorado River and one south of the river. The entire development will contain roughly 538 RV sites, broken down between 83 pull-through sites and 455 back-in sites. Sun Communities is also planning for roughly 341 park models, small manufactured RV accommodations designed to look like small cabins, 228 vacation villas and 37 “glamping” sites for structures such as yurts or safari tents.

The section south of the river will contain most of the resort’s RV campsites, currently set at 51 pull-through sites and 285 back-in sites. The southern section, which will be nestled around the two ponds owned by Granby, also includes all the planned “glamping” sites and nearly half the proposed park models.

The northern development section, north of the river, is set to see 32 pull-through RV sites and 170 back-in RV sites. Additionally, the northern section will contain approximately 199 park models and all 228 of the planned vacation villas.

“The numbers will remain very close,” O’Branovic said. “As we move forward there could be a slight change. Maybe we decide to add a bit of ‘glamping,’ and cut down some others. That will be fleshed out in the final [submission]; but it won’t be big changes.” 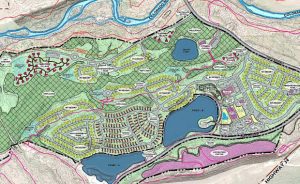 This conceptual drawing shows Sun Communities’ proposed layout for the development parcel south of the Colorado River, where most of the RV campsites will be located.

Sun Communities made several changes to their development plan after hearing concerns from local citizens. The area for villa construction has been reduced slightly and moved a short distance west to accommodate a wildlife corridor for elk, whose migration corridor ran right through the eastern edge of the initially proposed development.

“The natural pattern of migration from the elk herd that comes across the property on a daily basis goes along the northeastern edge,” Beleck said. “We had units up there in the original design. We have basically removed those units on that end. The net total is the same, we just found other ways to fit them in around the lake.”

“We are being respectful of the existing golf cart paths,” he said. “We plan on keeping them all in place. The idea here is those will be open to the public.”

O’Branovic sought to allay concerns about the future upkeep of the property under Sun Communities’ ownership. He said the Granby RV park will be a major investment for Sun Communities, which plans to make the property into a five-star resort. He also added that the nature of the luxury RV resort business means Sun Communities must “retain the highest curb appeal” as part of the guest experience.

Officials from Sun Communities said individual vacation villas within the development, potentially as much as 100% of the units, may be sold to private citizens in the future and could in turn be rented out by private owners as short term vacation rentals.