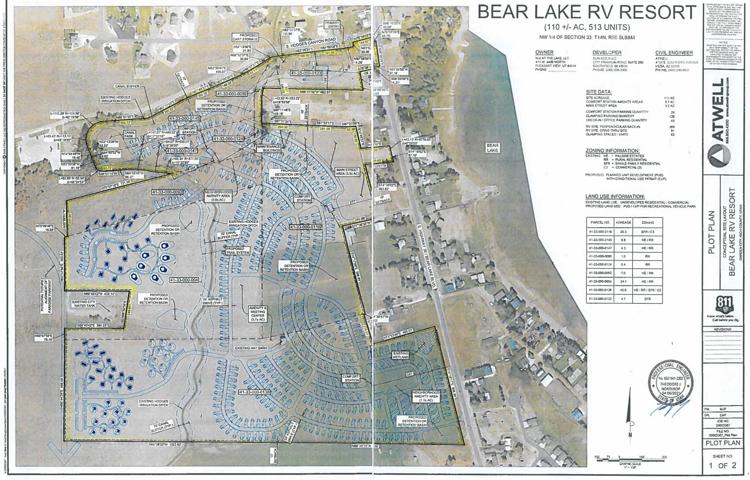 This image shows the proposed Bear Lake RV Resort plan as submitted in its application for project review to Garden City. As proposed, the resort would put more than 500 units on about 110 acres on the south end of the town.

A proposed RV park that could put 500 dwelling units on 110 acres in Garden City, Utah, has some residents nervous it could alter the direction of the Bear Lake town’s development, according to HJ News.

The project, called “Bear Lake RV Resort” in its application, would be situated between Hodges Canyon Road and the Pickleville Playhouse, taking up many of the fields west of existing houses on State Route 30.

“In one spot with that type of density, it’s the largest (development) we’ve ever seen in Garden City, by far,” said John Spuhler, who served as the town’s mayor from 2010-2018.

The RV resort is being proposed by Sun Communities Inc., a real estate trust headquartered in the Detroit area.

While planning for the resort is still in early stages and much could change as it goes before the Planning Commission and Town Council, plans for the resort include mostly RV camping with some other luxury camping options. A post on the Rich Civic Times newsletter states resort amenities could include a “clubhouse facility with indoor recreation and event space, resort-style pool, parks and trail network and a Main Street area for additional amenity offerings.”

The company does not own the site’s land yet but is working with current owners and is asking the town to rezone the parcels, most of which are in residential zones, to a planned unit development designation that would allow an RV resort.

“The developer … who is a publicly-traded company, is coming in and trying to change three separate zones that are zoned single-family that have no use, there’s no RV use in those zones,” Spuhler said. “Those are designed for single-family homes. And to move them into RV parks in areas that weren’t designed for that, it doesn’t meet our master plan in any way, shape or form. It’s in fact contrary to it. And that’s my problem with the council even considering it.”

With his wife, Melissa, and their son, Leo, Spuhler owns the Oso Blu resort consisting of five “luxury” yurts a little over a mile north of the proposed site.

Current Garden City Mayor Mike Leonhardt declined to comment on the project because it has not yet been formally presented in city meetings. Sun Communities did not immediately respond to requests for comment.

The Garden City General Plan, completed in 2014, includes goals to “allow development to occur on parcels of land most suitable for and capable of supporting the kind of development being proposed,” and to “channel development into areas where existing infrastructure is already in place or planned in the near future.”

Spuhler said he doesn’t believe the infrastructure is adequate for the resort as proposed.

“They’re completely asking for a specific rezoning so that they can build something that I think would be really challenging for our community in terms of traffic and just general infrastructure like sewer,” Spuhler said. “There’s a lot of reasons why we have a master plan, and frankly I don’t think we’re doing a very good job as a city looking at what does our master plan say and why would we allow this group to come in and rezone over 100 acres of land?”

Just down the road in Garden City, Sun Communities also acquired Blue Water Beach Resort for about $9 million in February, according to its 2021 first quarter results.