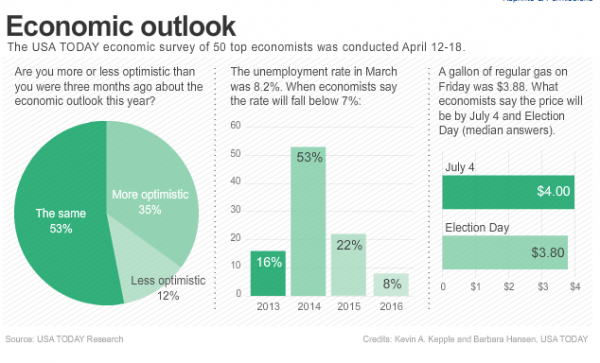 The U.S. economy will grow faster than expected this year, despite the headwinds of higher gas prices and Europe’s financial crisis, according to USA Today’s quarterly survey of economists.

Their median estimates are higher than in January for everything from this year’s business investment to hiring.

Economists think job growth for the rest of the year will be about 20 percent stronger than they did after Christmas.

The economy is strengthening enough that two-thirds expect the Federal Reserve to raise interest rates sooner than its late-2014 target, although none expects it to happen at this week’s Fed meeting.

The biggest reason: Consumers have bought more vehicles and gone out to eat more often, even though gas prices had been expected to make them spend less, says Jeff Rosen, an economist at Briefing Research in Chicago.

“Things are getting better,” Rosen says. “The economy is picking up and hiring is going to be on the rise.”

Median estimates — the point where half are below and half above — of the 50 economists surveyed forecast: