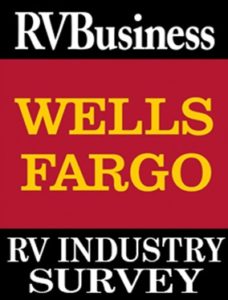 No one could have predicted back in early May, coming off a national commercial shutdown triggered by a global health crisis, that a surprising recovery like the industry is experiencing right now would occur as it has and that 64% of those responding to an RVB/Wells Fargo Survey in July would be ahead year-to-date.

But that’s one of the mystifying twists of 2020 and one of the leading takeaways from this latest survey, which indicated that sales for 38% of the survey’s 141 respondents were outperforming 2019 by more than 15%.

The survey also revealed that first-time buyers are becoming an even more significant factor in the RV marketplace as it stands today.

“Everyone’s aware of what occurred over the past few months in terms of national pandemic news and the whiplash it’s created for so many companies,” noted RVBusiness Publisher Sherm Goldenberg. “And, looking at the results, what this survey essentially does is frame the changes that have already occurred over the past few months and underscore the vitality of the RV sector and its ability to skirt the worst storms – at least so far – that any of us can ever remember seeing.”

RVBusiness is the sister publication to Woodall’s Campground Management.

Almost lost in the rearview mirror to many RV market observers, looking at the survey, is the fact that the RV arena — coming off a rather unexciting 2019 in terms of total RV wholesale shipment growth — started off this year on a strong note.

“When we did the annual survey at the beginning of the year, there was a good deal of optimism about 2020,” said Tim Hyland, president of Wells Fargo CDF’s RV Group, the inventory finance firm with which RVBusiness has collaborated over the past few years on industry-specific surveys. “It’s been a whirlwind since then. However, we began seeing that optimism return as states reopened and retail sales accelerated. Having experienced a great deal in the first half of the year, we thought it would be informative to get new insight from the industry as we begin moving through the second half.

“The RV industry has demonstrated resilience in how dealers and manufacturers have adjusted to an unexpected crisis and now the newfound safety aspects associated with RVs,” added Hyland. “The appeal of a socially distanced travel experience, in addition to the historic draw of the RV lifestyle, is increasing interest and creating a positive environment for the industry to flourish.”

Here’s a quick rundown of the latest survey:

So, how is your business doing year-to-date versus 2019?

We’re told that many companies enjoyed a strong early start in 2020 well before Covid-19 became a factor. How did your firm kick off the year?

The vast majority of the respondents, 87%, said the year started well for them, with 41% having performed “very strong” and 46% “moderately well” well before the nation’s health crisis erupted in March.

To what extent were companies negatively impacted by the pandemic outbreak and unprecedented shutdown on a scale of 1 to 5, with five representing the most impact?

The bulk of those surveyed, 78%, checked evenly the 3, 4 and 5 boxes – 26% each – meaning the damage done by these recent events was deemed pretty serious.

Conversely, how much on a scale of 1 to 5 – five being the most positive — has your firm benefited from the surprising upsurge in consumer demand that began in late April and May as the industry reopened?

How much of a factor from your perspective have first-time buyers been during the industry’s ongoing recovery?

As new buyers reportedly converged on RV dealerships in an effort to escape pandemic situations, 95% of the respondents said first-timers have either been a “huge” (57%) or “moderate” (38%) factor for their businesses since the recovery began.

Concurrent with this whole recent sales upswing has been a wave of positive national press regarding RV travel unlike anything the industry has seen before. How important in your view has this been in fueling demand?

All in all, 93% of those surveyed feel this year’s extensive national press coverage of the RV arena has been a significant factor in boosting the industry’s profile and sales, with 43% calling it a “major” element, 50% a “moderate” influence.

What do field inventories look like throughout the U.S. and Canada right now?

Nearly all of those polled, 94%, confirm that dealer inventories are substantially lower than they should be at the moment, with 56% indicating that they’re “critically low” and 38% reporting a “somewhat low” status.

Regarding your company’s current staffing compared to a year ago at this time, do you have more or fewer employees?

The majority, 56%, report the same staffing levels as 2019. Twenty-five percent employ “somewhat fewer” workers and only 15% have added staff.

To what extent have your employees shifted to a remote work status, one of the most substantial changes imposed by Covid-19 on the U.S. workplace?

As much as you hear about it these days, respondents in this industry apparently haven’t embraced remote work formats in a big way yet with 57% responding “not at all,” 35% having done so “marginally” and only 8% seeing “a great deal” of it at their companies.

Among the essay responses from industry people, who were asked about their outlooks for the second half of the year and beyond, were these edited comments – more of which will be included in the print version of this survey wrapup:

To get daily news on the RV industry or to read the latest issue of RVBusiness, click here.