By: Woodall's Campground Management|Published on: May 17, 2012|Categories: Industry News| 0 comments 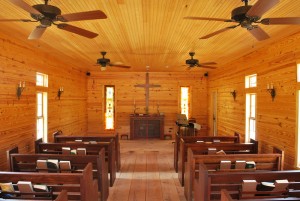 The chapel at Johnson Creek RV Resort near Ingram, Texas.

When people think of small campgrounds, it’s tempting to think of quiet places with limited amenities.

But such preconceived notions quickly fall apart when one visits Johnson Creek RV Resort near Ingram, Texas, which helps explain why the resort won the “Small Park of the Year” Award from the Texas Association of Campgrounds (TACO) last week for the second year in a row, according to a news release.

In addition to offering 100-foot long pull through sites with free wireless Internet and cable television service, Johnson Creek offers a variety of elaborate facilities for weddings, rallies and other special events.

Built amid a former pecan orchard on a scenic bluff overlooking Johnson Creek, the 50-acre park has a house on site with formal dining rooms and kitchen facilities as well as an outdoor dining and reception area that is shaded by a massive oak tree.

While the park’s serenity is a big draw, it is perfectly situated just 10 minutes from Kerrville and only 30 minutes from Fredericksburg,

The park also has a Western-themed chapel that looks like it was built in the late 1800s, complete with wood floors and pews, which is frequently used for Sunday services as well as wedding ceremonies.

The park also has a Western-themed rally hall and saloon, which is used for weddings, rallies and other special events with large groups of people. The interior of the rally hall is lined with fake furnished storefronts, which make it appear if you have stepped back into the days of the Old West.

Park co-owner Lisa Cauthen says the Western-themed décor is very popular with her guests, particularly those who come from out of state and want to savor the look and feel of the Old West while visiting her Hill Country resort.

Lisa Cauthen and her husband, Tom, started building Johnson Creek RV Resort in 2005. The Cauthens had previously spent more than 20 years running various businesses, including a scuba diving store, a health club and a mobile home park in Huntsville, Texas, when Lisa started asking Tom about some of his fondest memories.

“He told me how much he loved camping with his uncle when he was growing up,” said Lisa, who had similarly fond memories of camping growing up with her own family.

But after visiting the Texas Hill Country, the Cauthens found the area too much to resist. So they sold their Huntsville businesses and built Johnson Creek RV Resort, which they opened in October 2005.

In addition to receiving TACO’s small Park of the Year award, Johnson Creek has also received two 5W ratings from the Woodall’s North American Campground Directory for having top quality RV and recreational facilities. The 5W rating, which Johnson Creek first received in 2006, is the highest rating given by the Woodall’s directory.

The Cauthens live and work at the RV resort with their daughter, Delanie, who helps with tours, works in the office, waitresses during catered dinners and helps out with game nights.

Johnson Creek RV Resort & Park is a member of the Texas Association of Campground Operators, which publishes and distributes the Texas RV Travel & Camping Guide each year in addition to organizing awards competitions for its affiliated parks using outside judges. For more information about the 2012 directory or for statistics involving the latest camping trends in Texas and New Mexico parks, contact Brian Schaeffer at (817) 307-0129 or visit www.texascampgrounds.com and www.texascabinrentals.net.