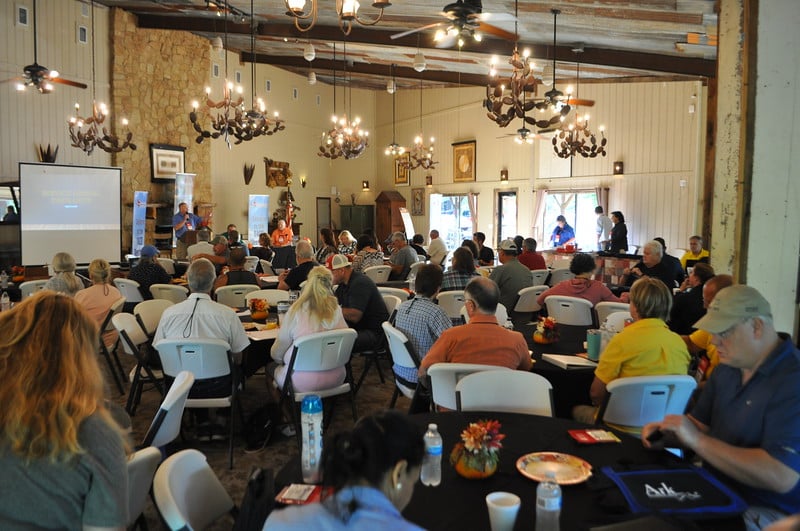 Attendees to TACO’s Fall Meeting were able to tour parks, take in educational seminars and hear of a host of legislative updates.

Meeting attendees also got to enjoy networking opportunities over lunch catered by Babe’s, a guided tour of the North Texas Jellystone Park, and self-guided tours of award-winning parks nearby.

“It was a fabulous meeting and we were thrilled with the very high level of attendance,” said Brian Schaeffer, TACO’s executive director and CEO, who told Leach and Krause about how park operators have been hit with massive increases in property taxes in recent years.

Krause said Texas voters will have the opportunity to vote on 10 constitutional amendments in the November election, one of which would prohibit the imposition of an individual income tax in Texas, while another would give the state legislature the ability to temporarily exempt properties damaged by disasters from property taxes, but he said park operators would need to work with their local taxing agencies concerning property tax rates.

TACO has been encouraging its members to hire tax mitigation companies, such as Dallas-based P.E. Pennington & Co. Inc., to fight to reduce their property taxes.

“We are encouraging all of our members to protest (property tax increases),” Schaeffer said. “If you protest, whatever the outcome is, your taxes are frozen for two years. We think the protest is the way to go.”

Schaeffer added that the more businesses and residents contest their local property tax increases, the less likely local jurisdictions will fight, simply because of the logjam created by such protests.

While state legislation does not address local property tax issues, Leach said it’s important for park operators to vote, particularly for politicians who will keep taxes low. He added that Texas’s state representatives are getting a lot of work done.

“When you look at the state of Texas, there is a lot to celebrate as opposed to Washington,” he said.

According to the Americans with Disabilities Act (ADA), service dogs do not have to be professionally trained or certified, Goff said. Someone can legally train their dog themselves, he added. ADA also does not require service animals to wear a vest, ID tag or have a certain type of harness.

TACO will be adding new language to its Legal Handbook on this topic and details such as whether service dogs need to be leashed.

Goff also said guests with service dogs must be allowed in all communal food areas, cabins and other common areas. No pet deposits or special cleaning fees can be charged for these animals, either.

Magda Wilcox, reservations manager for the North Texas Jellystone Park, and her daughter, Ryan Vallejo, guest relations manager, provided a session on yield management and discussed how computer programs can be used to raise rates during periods of high demand to generate additional revenue.

The goal, Wilcox said, is “to sell the right room to the right client at the right price.”

When customers complain because of a friend or family member who booked the same room or campsite for a lower price, they offer them a one-time discount and caution them that they will be subject to rates based on consumer demand next time.

TACO’s Fall Meeting included a networking lunch of fried chicken and chicken fried steak catered by Babe’s, as well as a guided tour of the Jellystone Park by General Manager Steve Stafford, who has worked at the park for close to a decade and overseen many of its improvements and expansions, the latest of which have been the addition of new ‘red-carpet’ RV sites and cabins. The park is currently building a pirate ship with 10 rentable cabin compartments, which it hopes to open next year.

The Fall Meeting concluded with a brief presentation by Jeff Crider, a longtime IMAHelps board member and volunteer who also works as a publicist for the campground industry and writes for WOODALLSCM.com. Crider formally thanked Schaeffer with a plaque presentation, noting his decade-long support for IMAHelps, a non-profit with no paid staff that organizes the largest medical humanitarian missions in Central and South America.

Crider noted that Schaeffer has not only consistently supported IMAHelps’ medical missions through his AGS Cares division, but hosted the non-profit organization’s website though his TXAD Internet division during a critical period from 2011 to 2014 when IMAHelps could not afford to pay for website design and hosting services.

“Without a website, we couldn’t communicate with donors, let alone recruit more volunteers. You helped us out when we really it, and we appreciate it, Brian,” Crider said.

The Fall Show was made possible with the support of several sponsors, including Armstrong Software, Rowley Insurance, Ulrich Cabins and Astra Campground Manager.

TACO’s Spring Meeting & Trade Show is scheduled for May 5-6 at the Lone Star Convention & Expo Center in Conroe, Texas.