Taking the 'Rough' Out of Roughing It

By: Woodall's Campground Management|Published on: May 2, 2012|Categories: Industry News| 0 comments 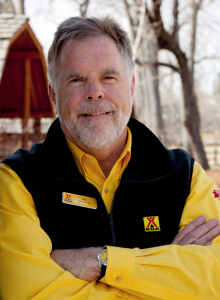 Those of you who wiggle out of family camping trips by claiming you’re just not into roughing it will have to find another excuse.

A range of camping options and innovations have made it far more comfortable to eat, sleep and otherwise spend time in the Great Outdoors, The Associated Press reported.

“’Soft rugged’ is what so many Americans are seeking in their outdoor experience today,” says Jim Rogers, chairman and CEO of Kampgrounds of America Inc. (KOA), which franchises or owns about 500 campgrounds around the country. So much so that he now refers to the camping industry as “outdoor hospitality.”

KOA has beefed up some of its campgrounds to include both basic and luxury cabins – the latter being the kind more often equated with family resorts than places to pitch tents. Rental costs $100 to $150 per night. Some sites offer coffee carts, pancake breakfasts, kids’ activities and entertainment.

Campers who want things a bit more – but not much more – rustic can browse the equipment lining the shelves at well-stocked outdoors stores (although some of the fancy new goodies may hike the price of that simple camping trip).

Take, for instance, REI’s Kingdom 8 tent, which is big enough to sleep eight. For $529, the tent is not just waterproof and bug-proof but also has moveable room dividers to create separate spaces with private entrances. Fill it with cots, airbeds and perhaps a ceiling fan created for tents, and you’re bound to get in a good night’s sleep. Toss in another $100, and you can add to it a “garage” to store food or gear — or use it as a place for the family dog to sleep.

Nifty outdoor stoves and cooking gear have made campfire-cooked canned beans and hot dogs moot, unless you really like them. 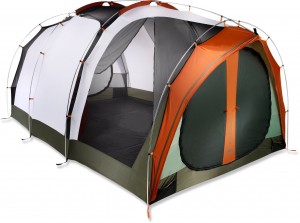 REI’s camp kitchen, for example, is a folding trove of food-prep workspace and storage – all of which can be carried around in a zipper bag. It even includes hooks for hanging up spatulas, and windproof screens so the elements don’t mess with your cooking.

Coleman, one of the biggest distributors of camping gear, sells a camping oven that fits handily onto one of the company’s two- or three-burner grills.

Don’t even think about grainy cowboy coffee, or even those classic enamel percolators. French presses, specifically engineered for outdoor use, are now the way to go if you’re picky about your coffee preparation (although the experience may not be exactly what you’re used to in your own kitchen). Coleman sells a propane-powered drip coffee maker that you don’t even have to put over heat.

And the retailer Eastern Mountain Sports sells solar chargers for your portable electronics because, as its website says, “Trees don’t come with electrical outlets to charge your iPhone.”

Some purists snub the idea of making camping more comfortable. They question whether lugging and using all that stuff dilutes the nature of, well, getting back to nature.

Much of the fancy new stuff is meant to be driven, not carried, into a campsite, and is heavy enough that retailers don’t recommend carrying it far.

So can you really get away from it all when you are bringing it all with you?

“There are so many different kinds of camping experiences, and they are all camping,” says Avery Stonich, spokeswoman for the Outdoor Industry Association. “It’s all what it means to the individual.”

“You can even go out to dinner if you go camping,” she says.

All of which has spurred a newfound interest in camping among folks who might not have tried it otherwise, says Stuart Bourdon, editor and associate publisher of the magazine Camping Life. Campgrounds near lakes or the ocean are particularly popular, with reservations filling up a good two months in advance, he says.

“The camping experience can be as close to a home kitchen and bedroom experience as you want to make it,” Bourdon says.

The way Rogers at KOA sees it, the facilities and the gear are only small parts of the larger experience of being on a campground, which he calls “the last small town in America.”

“People who consider ‘camping’ the Marriott will be very accommodated both in terms of the facilities available and the amenities,” he says, adding, “It’s hard to have a campfire in a Marriott hotel room.”