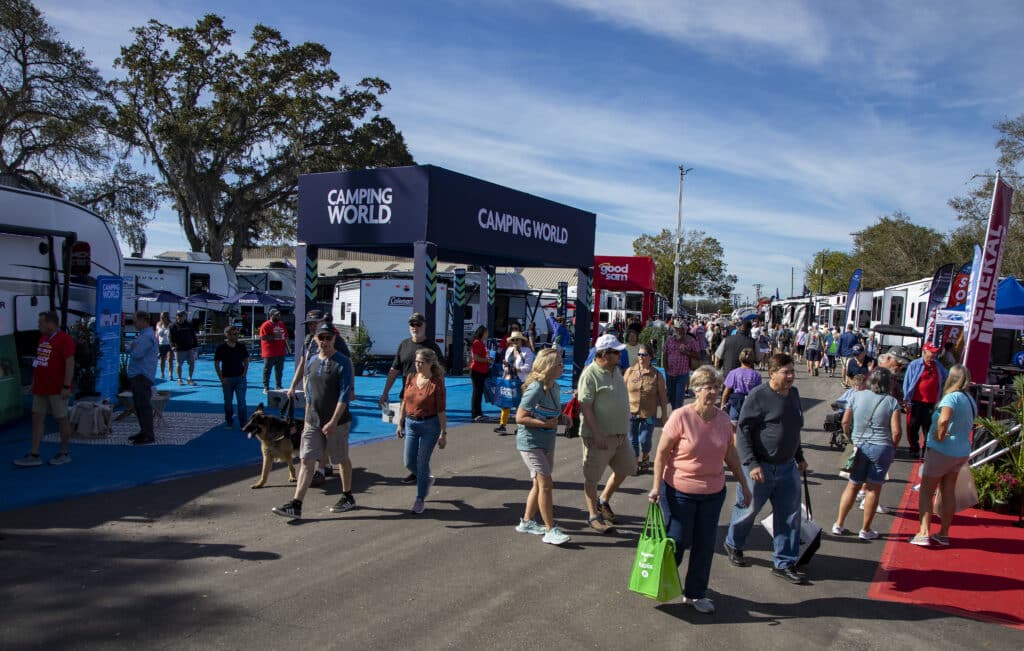 Attendees during the Opening Day of the 2023 Florida RV SuperShow. (Photo: Shawn Spence/RVBusiness)

That was the overwhelming takeaway from those on hand – whether consumers, suppliers, dealers or manufacturers – during the final day of the Florida RV SuperShow at the Florida State Fairgrounds in Tampa on Sunday.

Long known as a barometer for the RV industry selling season, many in the industry were expecting a more modest outcome, given the current economic climate of inflation and higher interest rates – as well declining wholesale and retail RV sales reports.

But truth be told, no one who spoke with RVBusiness offered a negative report, including Dave Kelly, executive director of the Florida RV Trade Association (FRVTA),  which organizes the event. 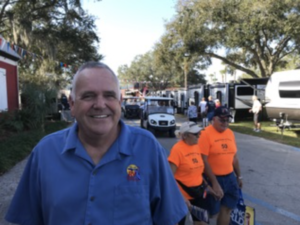 “We’re hearing nothing but great things. Interest has not waned one bit from what we can see,” Kelly said. “Blue Compass RV said it was better than their expectations, Lazydays was ecstatic and General RV was very, very happy. Vendors were selling out within the first few days and had to reorder restock. Consumers were looking for parts and accessories, so maybe they’re coming to the show not to buy another unit but to stock up on parts.

“We came into the show hearing from Hershey (the 53rd annual “America’s Largest RV Show held last September in Hershey, Pa.) that their numbers were off, and we usually gauge how we do based on how their show went,” he continued. “We really anticipated a downturn in attendance, but it has not happened. Yesterday (Saturday) we were close to 70,000 people. We’re probably not going to break last year’s record but we’re going to be pretty darn close.”

Nearly 84,000 people attended the 2022 installment of the SuperShow, breaking the previous record attendance of 74,286 in pre-COVID 2019. While Kelly doesn’t expect this year’s show to set a new record – a final tally of the 2023 show wouldn’t be available until later – he thought it might end up closer to 80,000 and go down as the second best show in terms of attendance.

“It helped with the weather being the way it has been, and the level of interest is still there,” Kelly said. “I mean we’re pushing record numbers here, and the dealers are very happy from what we’re hearing. Good numbers. They were anticipating a lot more of a slowdown down with the sales end of it, but from the one’s I’ve talked to, they’re really happy with what they’re getting.” 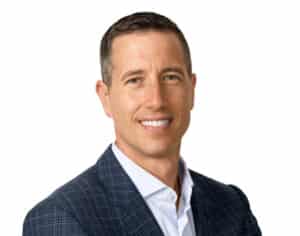 Keystone RV President and CEO Jeff Runels had a similarly positive take on Tampa, but was a bit more cautious looking forward.

“I will say one of the reasons everyone is so excited is because the traffic was phenomenal – just as it’s been at all the other shows so far,” Runels said. “It’s that first kind of sigh of relief when you get through that the first day, and then it stayed steady all the way into the weekend and the reports I got were that Saturday was as busy as they’ve ever seen it. So, the buyers continue to be out there.”

Sales numbers trended to a good show as well, especially in the mid segment.

“The mid price points seemed as steady as we’d expected, if not better,” Runels said. “There were sales across all price points, but with the entry level, I still think we’re finding our way. Buyers, as well as dealers – as well as us – are trying to figure, OK, where’s price point for entry level and where do we need it to be? I think people are still expecting it to be where it was two or three years ago and that just doesn’t exist.”

And while there is still work to be done in entry level, Runels said there were good sales across all segments and the show, for the most part, was better than expected.

Even so, it’s still too early to apply that “better than expected” assessment to the entire 2023 selling season, Runels said, adding “I think it’s right for RVIA to continue to curb overall expectations because shows seem to be strong, but if you talk to dealers, if you talk to customers, you would think they’re coming out because of the shows.”

In years past, a solid show generally meant there would be solid follow-up at dealers’ lots, and that may be the case this year as well, he said.

“We’ll see what the next couple of weeks bring after these shows settle and customers are able to get deals at the lots. But so far, lot traffic hasn’t been as robust as show traffic, so I’m not ready to say, hey, this is going to be gangbusters. We are ready to say we’re going to be OK this season. There are buyers out there. … We’re going to find ways to get to them and we’re going to get through the season. So, I think it’s (Tampa) a great sign.”

An interesting side note from Kelly’s observations had to do with demographics.

“In my 36 years at the show, I have never seen so many kids and families on Wednesday, Thursday and Friday,” Kelly observed. “Those days used to bring in senior citizens and retirees.” 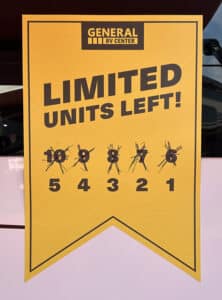 Signs like this one were not uncommon throughout the Florida RV SuperShow. (Photos: Gary Gerard/RVBusiness)

He speculated that may be evidence of RVs being used for remote work and homeschooling as more families take to the road full time.

“The interest hasn’t waned one bit from 2021 and 2022,” he said. “Obviously they’re still interested. They’re coming out to see product and I think it bodes well for the whole year and the whole industry.”

St. Petersburg, Fla., residents Robert and Alisha Patterson, owners of a Grand Design Momentum toy hauler travel trailer, have been to the Tampa Show several times and were looking at new products and considering an upgrade.

Higher interest rates were not an obstacle for them.

“We don’t pay attention to that much right now,” Robert said. “You have to look what time is right to buy and sometimes this is the right time to buy because dealers here mark units down so they don’t have to take them back to the lot.”

He’s not wrong. Dealer discounts in the range of 40% off MSRP were not uncommon at the show. Discounts like that lead to sales and one sales rep for a towable manufacturer noted late Sunday morning that his company had written 50 deals so far at the show. That compared to 33 at Tampa in 2022.

Recently retired and without an RV for the past few years, Joe and Linda Lupo, of Fayetteville, N.C., were in the market for a Class A motorhome – most likely a Newmar Dutch Star or Winnebago Journey.

“Looks like now is the time to buy,” Joe said, noting that this was his first visit to the Tampa show. 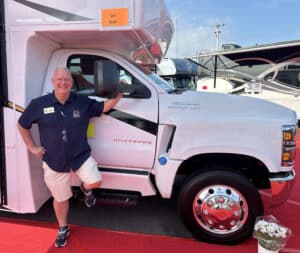 Originally concerned traffic at the NeXus display ­– toward the back of the show grounds with no tram available this year – might be lacking, he was happy to be proved wrong.

“Going into today,” he said Sunday morning, “we are even with last year. So, we are very pleased overall. People are seeking us out, the pricing is tremendous, and we are one or two units away from going beyond what we did last year, and we still have the rest of today. We couldn’t be more pleased with the way it turned out.”

He said Tampa is always the big gauge for the retail selling season and the traffic here bodes well for the industry.

“I still think there will be a correction, but there are buyers. There are people who still want to enjoy the lifestyle and I think we’re getting back to normalcy,” Middleton said. “There’s not going to be a big drop, but we’re coming off record years where everyone was going bananas. … I know interest rates are a concern and dealers are cutting their prices, but that’s OK. They’re moving product and still making a little bit of money and customers are getting a great deal. It’s a win-win.” 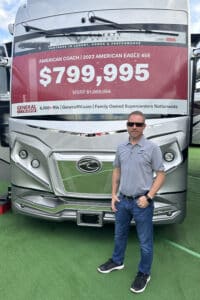 At a display of Class A luxury motorhomes by Decatur, Ind.-based American Coach, a REV Recreation Group unit, Marketing Manager Don Gephart, was pleased with the show as well.

“Traffic has been really good. Lots of interest in our motorhomes,” he said. “We’ve got a few new floorplans here and sales have been good, so it’s been a good show for us.”

The show turned out fairly close to what he anticipated.

“Expectations were for things to kind of get back to normal and that’s about where we are,” he said, “the turnout, crowd-wise and the retail.”

He said the show bodes well for the future.

“I think it’s a good sign, going into 2023,” he said. “We’re seeing there’s still interest in RVing where America, I think, is ready to stay out on the road, go RVing and see the country and Tampa’s a great show to kick off that year.” 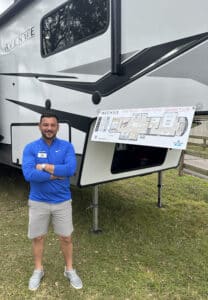 “I started in Cleveland with great traffic and great sales,” Saleh said. “Went from there and attended the Boston show, which was phenomenal. We haven’t seen traffic in Boston like that in a long time. And obviously, this week in Tampa has been great for us.”

He believes trends like this indicate a positive sales season looking forward.

“So, if I’m looking at all three weeks, and that’s an indicator, it’s a pretty good one,” he said.

“I would say it’s equivalent, which is good sign,” he said. 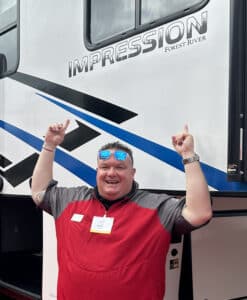 At one of the Forest River displays, Southeast Sales Rep Dave Shannon, who sells Impression mid-profile fifth-wheels, said the show offered some surprises.

“It was kind of interesting. We didn’t know what to expect as far as what traffic was going to be like,” he said. “But ticket sales were up 20% from 2019 and that was a real gauge of the truer market. So, the demand was there. Up from 2019. You know 2020 and 2021 were make-believe years so it was refreshing to see ticket sales were up this year.”

And so were sales. He said sales were up 20% over last year in the display he was repping for General RV. 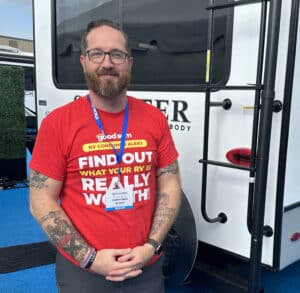 Camping World of Tampa’s display at the show also saw heavy traffic the likes of which was a bit surprising to Ben Black, general sales manager.

“We’ve been very busy. Very busy.” he said. “From what we saw in predictions going in, it seems like much busier than anybody thought it was going to be. It’s great news. We’ve had very good business. Lots of people looking. Lots of people who haven’t purchased before. A lot of serious buyers.”

Suppliers, for their part, also saw heavy consumer traffic and lots of product moving off their shelves in the two Supplier Expo buildings accommodating more than 400 booths.

Sara Dover, brand manager for activation at Dometic, summed it up like this:

“RVers like to shop things a little bit, but I guess if these people were asking me for advice, I would say I wouldn’t wait to buy something. If you see it, and you think it’s cool, you should buy it, because it’s selling out.”