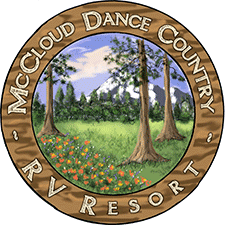 Dance Country RV Resort in McCloud is scheduled to be sold at a public auction this month, The Record Searchlight, Redding, reported.

“This is a very big deal,” said longtime resident Margot Grissom, a McCloud Chamber of Commerce volunteer who also answers the office phone.

The auction was scheduled for this week, but Grissom said she was told it has been delayed to April 30.

Dance Country is a seasonal park that closes in the winter and opens in May.

The resort features more than 100 RV sites and typically draws large motorhome groups who stay for a weekend or longer. Southern California-based OneWest Bank foreclosed on the resort.

Rob Kenner, of Waterhouse Management Corp. in Roseville, said his company is in the process of signing a contract with OneWest to manage Dance Country and keep it operating during the foreclosure.

The goal is to open the park May 1, said Kenner, who referred other questions to OneWest Bank.

A OneWest Bank representative couldn’t be reached for comment.

Both Grissom and Kevin Mathis, who co-owns the McCloud Mercantile Inn, said losing Dance Country would be a bigger blow to McCloud than the Sunset Dinner Train, which went out of business in 2010 after nearly 15 years.

Grissom explained the dinner train hurt the area’s lodging business, but Dance Country would have a broader impact on McCloud and surrounding communities.

“The RV people come in Friday and they leave on Sunday. They go to the market, the deli, the restaurants, gas station, gift shops,” Grissom said.

John Croce, managing member of the Guest First RV Resorts group that owns Dance Country and several other parks, said OneWest foreclosed on them because they were about $100,000 behind on their property taxes over a two- to three-year period.

Croce emphasized the group was current on its mortgage and never made a late payment.

“I was confident that something could be worked out,” Croce said, “but they hard-(balled) us; they made demands that were impossible for the property to make.”

Croce explained the Great Recession took away much of Dance Country’s group business, which he said was unique to the park.

“Those parks are doing much better because they don’t do the group business,” Croce said.

For roughly a decade, the Redding Traildusters RV Group has reserved space at Dance Country for its annual chili cook-off in June. The group will typically take up about 100 spaces.

“We put down a $1,500 deposit last year for this year,” said Traildusters member Gayle Wright.

But when Wright’s group heard Dance Country was headed for foreclosure it decided to move this year’s event to Durango RV Resort in Red Bluff.

“We couldn’t let ourselves hang out with 100 rigs,” said Wright, who’s a member with her husband, Alan. But Wright’s group still doesn’t know whether it will get a refund of its deposit.

Croce asked for Wright and others to be patient.

“There will be management in place. They will honor reservations,” Croce said.

Asked if deposits will be refunded, Croce said he couldn’t be certain.

“Maybe; we are working on that,” he said. “We have a limited amount of money because we have been destroyed. So it depends on how many cancellations. If it’s not a whole lot of people, we can handle refunds.”