As businesses and homeowners continue to deal with Hurricane Harvey’s devastation, many of the Texas Gulf Coast’s RV dealers were still adjusting over the Labor Day weekend to life in the wake of the epic storm which made landfall on Aug. 25, and ultimately dumped an estimated 27 trillion gallons of rain over Texas and Louisiana over a period of six days.

To gauge the status of some high-profile Texas dealerships, RVBUSINESS.com contacted a number of businesses on Labor Day (Sept. 5), a holiday on which many retailers ordinarily wouldn’t have been open. However, it seemed as if most every dealership that was able to do so was up and running to conduct regular business and also help companies in need of temporary housing for storm-related workers and an untold number of homeless evacuees in need of recreational vehicles for temporary shelter.

Suffice to say that business, for any variety of reasons, was brisk over the Labor Day weekend for some retailers in what amounted to the first wave of storm-related sales to individuals with the money to purchase their own RV’s – no federal assistance involved at this point. 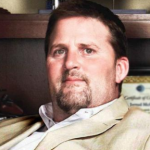 “Sunday, we delivered 30 units at just the Cleburne location,” said Jarrod McGhee, CEO of Fun Town RV, with nine stores in Texas and Oklahoma. McGhee reported that only one site, Fun Town RV Houston in Wharton just south of Houston, sustained appreciable damage including a flooded shop from the epic hurricane. “Five or six of them (buyers) were needing something to stay in. They had either lost their place or they had family in town that had lost a place, and we were trying to do what we could for them.

“It’s different than selling to experienced RVers,” he added. “So, as an industry we have to be careful to help these people. If we just sent them out there like they’re an RVer that knows what they’re doing, they’re not going to be doing themselves any good getting an RV. We’ve got to show them how to use it right, teach them how it’s different than a house. So, we’re trying to take a little extra time to teach them how to use these things.”

That said, McGhee knows that he and his staff dodged a bullet in terms of Hurricane Harvey, considering the fact that Fun Town had about $6 million in towable RV inventory on the ground.

Here’s what we heard from a few other dealers:

ExploreUSA RV Supercenters: “We have a store in Alvin just southwest of Houston, and I don’t understand  — knock on wood  — how it didn’t flood,” said Scott Chaney, CEO and co-owner of the nine-store, Plano-based dealership. “We didn’t flood or sustain any damage in our store. We came through it fine, which in itself is a miracle. So far a lot of companies from around Houston have come in and some have bought RV’s and are inquiring about places to put their workforce.”

All nine stores up and running, although Alvin store was out of commission for about a week as employees faced their own personal flood-related challenges. Chaney, in turn, said he’s complied with FEMA’s request for information regarding units in inventory.

“We’ve had phone calls from as far away as California and the East Coast with everybody wanting to sell us their RVs, especially their aged inventory,” added Chaney. “For some reason, they think FEMA’s going to buy a bunch. But I don’t know anything about that. All I’ve done is fill out their RFI form. I haven’t been contacted by FEMA. I just did what our association and RVIA told me to do, which is to register online, fill out the RFI that they requested, and I haven’t heard a word since.” 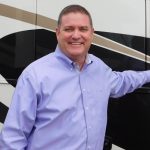 Crestview RV Center: Also dodging bullets was Crestview RV Center, reports President Mike Regan, with its south store located south of Austin in Buda, Texas, and its north store situated north of Austin in Georgetown. “Austin was right on the edge of the storm,” Regan told RVBUSINESS.com. “The south store had high winds and lots of rain and we actually closed for one day, but we had absolutely no storm damage at all. The north dealership, which is 60 miles away, had light rain and no wind at all and we were fine. So, we have no damage at either lot. And all of our employees came through unscathed. So, everybody’s good.”

Camper Clinic RV: Camper Clinic’s main store in Corpus Christi fared pretty well in the hurricane. However, General Manager Allen Libbe reported that the dealership’s Rockport outlet had the bulk of its inventory damaged, but the facility – without electricity or a predictable water supply – is indeed up and running on generator power.

“Rockport got hit pretty hard,” said Libbe. “I think they only have about 10% of their inventory that’s even sellable. In fact, their phones are still off at this stage and they’re being transferred over here (to Corpus Christi), and we’re trying to help as many people as we possibly can.”

So, Libbe noted, Camper Clinic, a towable and motorized dealer, is ultimately facing the same sort of rebuild that the rest of the Houston area is confronting.

“Yeah, there wasn’t a garage door left on the shop with water damage inside the parts department and some of the offices,” he added. “It’s been a little over a week where we’re just trying to get up and running and so we can help all the disaster victims and the first responders that are actually in the surrounding area. I mean, whatever we can do to help the community we’re trying to do. And right now the community’s rallying together to help each other out.”

“We’re trying to help people basically any way we can,” said Libbe. “Our parts department is trying to help as many people as they can with adapters and generators and vents and air conditioners and all kinds of things. The sales department obviously is open, and we’re trying to help people that might need temporary living quarters because they’re homeless. This is the first time in 15 years I’ve actually been open on Labor Day. Usually we’re out camping. But we’re open to help the community because the community needs so much help.”