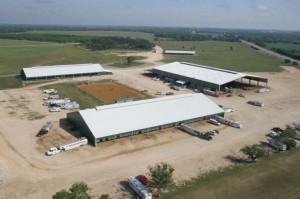 Aerial view J.B. Wells Park near Gonzales, Texas, which has welcomed oilfield workers living in their RVs. The action is in violation of state regulations.

The Texas body that governs public parks that receive grant funding says the city of Gonzales’ use of J.B. Wells Park as a long-term RV park is in violation of the agreement under which the city received grant funds, and the state wants the city to implement “a policy to safeguard this park for outdoor recreation use.”

That new policy is expected to be presented to the city council at its 6 p.m. meeting Nov. 5, the Gonzales Inquirer reported.

J. B. Wells Park is a 169-acre park that has a covered pavilion, multi-purpose show barn, covered arena, practice arena, a hike and bike trail and 392 RV hookup sites.

But for those who think the city should not be in the RV business and want the city park reserved only for recreational visitors rather than oilfield workers, don’t expect any major changes.

To be sure, the draft of the new policy is expected to meet the requirements of the Texas Parks and Wildlife Department (TPWD), but the state agency appears to be giving the city as much flexibility as it can in adhering to the standards set forth in the project agreement executed when the city received $500,000 for J.B. Wells Park in 2001.

“I have had two conversations with city employees and I sent a letter to the city manager on Oct. 16 asking the city to adhere to the guidelines of the grant agreement which state that the park should be used for outdoor recreation,” says Dana Lagarde, parks grants manager for TPWD. “The city has agreed to put a policy in place requiring visitors to check in and out within a specified period of time. We did not dictate a 14-day use, but would like the elected officials to do what they feel is in the best interest of their citizens and community.”

Gonzales city attorney Jackie Williamson has been tasked with drafting an RV policy for Independence Park and J.B. Wells Park that will be presented to the council.