The 93-acre Alamo River RV Resort  in San Antonio, Texas, is offering their facility for free to members of the military, according to an announcement from the park.

The park is close to Lackland Air Force Base and is available for all active military personal and dependents to use free of charge. Former service members and retired military personnel are offered a reduced rate for use of the park. 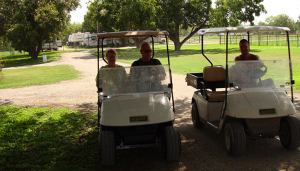 Activities include fishing along one mile of the river, hiking and biking on the shaded trails, canoeing and kayaking camping in both tent and RVs (for up to two nights when space is available), horseback riding and horse camping. All of the activities are available at no cost to the service member. A current military or dependent ID card is the only requirement for entry into the park.

Future plans and projects include acquiring additional land which will allow Alamo River to add an equestrian center, fishing lakes and additional trails and camping areas. The equestrian center will offer horseback rides and horse therapy for wounded warriors who are experiencing post-traumatic stress disorder. “San Antonio has long needed this kind of facility for our military and it is here now,” said Charlie Brown of Alamo River.

“The park will be open to the public and we hope the citizens of Bexar County will support our military by utilizing the amenities for their own needs such as picnics, birthday parties, weddings, family reunions, company picnics, church picnics and just having a great time in the outdoors,” Brown said.

Alamo River RV Resort has long supported the military by being a member of Tents 4 Troops. This program offers free camping for military members and has numerous parks throughout the country. Their web site can be accessed at www.TentsForTroops.org. This organization has offered free camping and RV stays and is growing every year with more and more RV parks joining in honoring our military.

A memorial service will be conducted on Saturday (Feb. 21) at the park to remember the people who lost their lives at the Alamo. On Feb. 21, 1836, the Mexican Army — led by Gen. Antonio de Santa Anna — camped on the property now occupied by Alamo River. Two days later on Feb. 23 he arrived in San Antonio and began the siege which ended with the deaths of 189 of the defenders of the Alamo and more than 300 members of the Mexican Army.