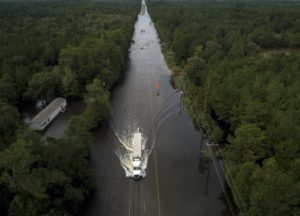 A truck drives on a flooded highway Friday (Sept. 19) in Mauriceville, Texas, after Tropical Storm Imelda.

The Texas Association of Campground Owners (TACO) has identified campgrounds that can accommodate people who have had to flee the greater Houston area because of Tropical Storm Imelda.

The widespread damage brought to the Houston area by one of the wettest tropical cyclones in U.S. history came into broader view Saturday, as floodwaters receded to reveal the exhausting cleanup effort that lies ahead for many communities and homeowners, according to the Los Angeles Times.

Hundreds of homes and other buildings in the region, extending eastward from Houston and across the Louisiana border, were damaged by Imelda, as the one-time tropical storm slowly churned across the region, dumping more than 40 inches of rain in some spots and being blamed for at least five deaths.

“We are reaching out to campgrounds, RV parks and resorts across Texas to see who has campsites and/or rental units available for Imelda evacuees,” said Brian Schaeffer, TACO’s president and CEO.

“Our hearts go out to everyone affected by this storm,” said Judy Pace, of Pioneer River Resort in Bandera. “Our park is on a river, so we know how devastating a flooding situation can be. We currently have some sites available until Oct. 25, and would welcome folks in need.”

Some campgrounds are already accommodating Imelda evacuees, including I-35 RV Park in Waco.

As of Saturday (Sept. 21) afternoon, TACO had identified several campgrounds or RV parks with space available for Imelda evacuees in the greater Houston area, as well as in other areas of the state.

Schaeffer said evacuees should check TexasCampgrounds.com to identify additional parks outside flood zones that can accommodate them.