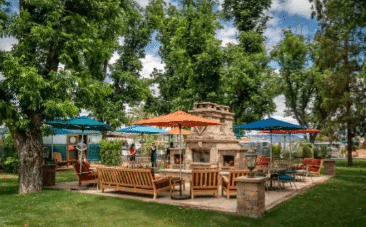 Launch Pointe has numerous gathering points in its park.

Editor’s Note: This story was written for MobileRVing’s The Buzz by Andrew Malo.

“The only thing that isn’t new is the trees,” says Beau Davis, community services superintendent for the city of Lake Elsinore, Calif., speaking about Launch Pointe RV and Recreation area.

The city of Lake Elsinore has owned the property for decades and recently completed a renovation project.  There are tons of campsites, vintage campers and yurts, beverage and food options, and, of course, the lake.  It is located in southern California between San Diego and Los Angeles.

“The local residents and campers who have been coming here for years are all really excited about it and give us such positive feedback,” Davis tells The Buzz.

Launch Pointe has a lot of amenities.  Starting with the campgrounds, there are seven different spaces that all cater to a different type of camper.

“For example, the Aquaplane Lane has about 20 sites and in the middle of the square there is a really great 4,500 gallon splash pad for kids,” says Davis.

Another kid-friendly spot is the Canopy Court, which has integrated tech games like QR code adventures.  Other areas have quiet views of the lake, like The Track & Trails Parkway, or relaxed camping in old-growth pecan trees like The Fields. Some of the spaces are good for long-term rentals.

“Something that is really unique about our campground is we have nine vintage trailers that are available for rent,” said Davis, “They are small, but we rehabbed them for modern day appliances and conveniences with an old-school vibe.”

They have several interesting trailers, like the 1946 Spartan Manor 9, which is outfitted with a fireplace, patio, Wi-Fi and full kitchen.  They have a couple of other Spartan trailers, too.

Spartan trailers were made by an aircraft company that decided to go into the trailer market. These were considered the “Cadillac” of trailers and were expensive even when they were made in the 1940s and 1950s.  According to the Spartan website, “When we compare the price of a brand new home in Levittown for under $8,000 including the land, the 25 foot Spartan Manor at close to $4,000 was rather expensive.”

They also have several models of vintage Airstreams and rarities, such as the 1953 Boles Aero, a California-made trailer similar to Airstreams.