By: Woodall's Campground Management|Published on: May 23, 2018|Categories: Industry News| 0 comments 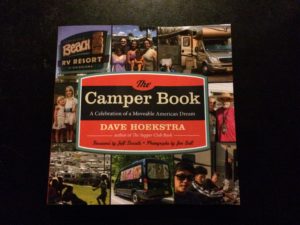 “The Camper Book: A Celebration of a Moveable American Dream,” just released in paperback for June of 2018, is an eclectic collection of interviews and viewpoints of life on the road and the American RV lifestyle. Written by Dave Hoekstra with photography by John Sall and published by Chicago Review Press, the book includes a foreword by film actor Jeff Daniels.

“Maybe it has to do with controlling our own destiny,” ponders Daniels. “Or choosing to no longer endure the indignity of being patted down by an overly patriotic TSA agent. Or maybe it’s the freedom that comes with not knowing where we’re sleeping on any given night.”

Heading into semi-retirement after the passing of his parents, Hoekstra decided to take on the full-time RV lifestyle with writing the book in mind. His vehicle of choice is a 2015 Ford Transit cargo van with wrap-around windows which he picks up at a dealership near St. Louis. He then ventures to Elkhart, Ind., and works with Prime Time Specialty Vehicles to build a simple yet comfortable travel van for his journey costing just under $69,000.

From June 2016 to March 2017 Hoekstra visits 24 states covering 24,222 miles while returning to his hometown of Chicago intermittently to gather and write his notes and interviews. Photographer Sall traveled with him for one month. Hoekstra’s interview style and colorful sketches of the people he encounters on the road are reminiscent of Studs Terkel’s Americans or William Least Heat Moon’s Blue Highways.

A travel log mixed with some light RV lifestyle educational lists and advice, Hoekstra’s book covers campgrounds from Florida to California looking into both the owners and campers. Other chapters take the reader from the Iowa State Fair to camping near the National Baseball Hall of Fame and Museum to hitting the road with Chicago Cubs Manager Joe Madden in his luxury motorthome.

Family and time together is a theme throughout Hoekstra’s book, including interviews with a TV meteorologist and her husband who have been family camping since 1978 and are now passing the gift on to their two little girls. He also writes of the gay-friendly camping scene in the Ozarks with campers Alvin and Charlie along with a family camping near the French Quarter in New Orleans and a visit to Graceland.

“I thought I might discover the meaning and boundaries of place through my travels,” writes Hoekstra. “But I learned that place has no borders in the camping world. Place can be as far as the horizon or as near as memory carved in a picnic bench.”

The book is worth reading for the avid RV enthusiast or for those interested in the RV lifestyle who want a glimpse of the big picture of today’s diverse camping scene.