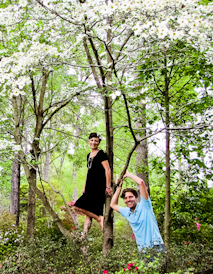 The Wynns in an azalea garden in Texas.

A couple from Texas are living in a motorhome and traveling the country, after selling their house last year. This week, they’re visiting the Grand Strand in Myrtle Beach, S.C.

It’s not unusual for retired people to live the recreational vehicle lifestyle, but Jason and Nikki Wynn are both just 30 years old, less than half the age of most RV full timers, reports WPDE-TV, Conway, S.C.

“When we roll into an RV park, we definitely stand out. We walk down the road and people see us and they’re like, ‘Hey look, youth!’ ” Jason laughs.

Jason is a photographer and Nikki, a make-up artist.

With their first camper, an old Volkswagen van, they came to love the camping lifestyle so much that eventually, they chucked their former lives and replaced their home in Dallas for one on wheels. They’ve been on the road for the past year.

“We do not have a home base,” said Nikki Wynn. “This is it. It is our home on the road. Everything we have fits in 32 feet.”

“We want to go somewhere where we can be outside, we can enjoy the mountains, enjoy the beach and that sort of thing,” said Jason.

The Wynns are managing to find ways to make money by writing articles for publications and shooting photographs or videos for RV parks around the country.

With Internet connections and smart phones, the Wynns say there are many ways for people today to make a living on the road.

“We get really creative and it’s not one thing we do that makes us money, it’s just reaching out and finding a need and fulfilling that,” Nikki Wynn said.

Adjusting their lives from a 4,000-square-foot house down to a 32-foot motorhome seemed impossible for the Wynns at first, but they did it and now they have advice for others who may be thinking about downsizing their lives.

The Wynns’ adventures in RVing have been featured on HGTV, they’re working on a TV show for the CW network and they have their own website, “Gone with the Wynns.”

But all that may be just the start.

“The open road just provides so many opportunities,” Jason said.

The Wynns spent last year on the West Coast. This year, they’re making their way up the East Coast. Jason Wynn said their original goal was to spend two years on the road before settling down. Now, they think it may be more like four years.

Click here to read an earlier story in WCM about the Wynns.