This Jellystone's More Than A Campground

By: Woodall's Campground Management|Published on: May 21, 2015|Categories: Industry News| 0 comments 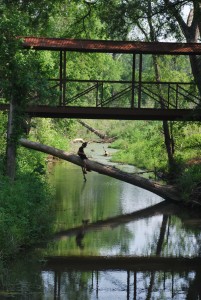 If there’s one thing passers-by might get from a glance at Rustic Creek Ranch Resort at North Texas Jellystone, in Burleson, Texas, it’s that families are welcome. That will be even more apparent come Memorial Day, when the resort publically unveils its newly renovated Pirate’s Cove waterpark, which recently received a $1 millon upgrade.

“We’re very excited about the new Pirate’s Cove,” said General Manager Steve Stafford. “The previous waterpark was extremely popular and now it’ll be even bigger and better. We think it’ll be a hit with the surrounding community and with visitors.”

The new Pirate’s Cove attractions will include a 60-foot tall Kamikaze Slide that provides a nearly vertical drop as well as a 60-foot tall “fast track” with six side-by-side lanes that provide a 350-foot-long slide. The park is also installing two 40-foot-tall corkscrew slides with that dump into a swimming pool, as well as a paintball play area and a new food court.

Other new features will include a 700-foot-long lazy river with zero-entry lagoons and a stage area for concerts and “dive-in” movies, which can be seen from a swimming pool.

This brings the cove’s total square footage to 26,000 with seven water slides, a pirate-themed structure, a floating lily pad, a ropewalk, 28 cabanas and an activity pool.

And while the towering slides will be the park’s most visible entertainment feature for those who drive past on nearby Interstate 35W, the park also features a 13,500-square-foot family entertainment center that includes a food court, a climbing structure, bowling, laser tag, a frog-hopper ride and more than 40 interactive and arcade games.

Stafford readily admits that, with the massive entertainment complex, running the park is like running two good sized businesses, and, in fact, it often feels more like three or four.

“We also have three beautiful meeting halls of a couple different sizes on site,” he said. “So any given weekend, we could have a wedding, a family reunion and then, in the Bear’s Den hall, Yogi’s doing his thing. There’s not a lot of down time.” 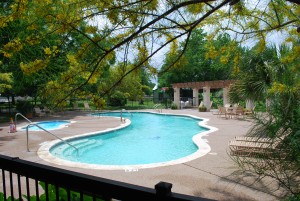 It’s also fairly remarkable to learn that, just a few years ago, Rustic Creek Ranch had a very different atmosphere.

“Up until 2010, we didn’t even have a playground in this campground,” Stafford said. “It just screamed, ‘no kids allowed’ basically. It was an adult park. It had an adult pool. We did have a family pool, but it was at the far end of the park.”

For park owner Ronald Bowyer, the journey to establishing Rustic Creek as a family entertainment mecca was a slow one that took a few turns. Bowyer purchased the park in 2000 under the name RV Ranch. He began adding cabins and making improvements to the park structures. Stafford came aboard in 2009 and, looking to make the park more marketable for weddings and corporate events, they changed the name to Rustic Creek Ranch. Still seeking ways to make the most of the 72-acre park, they took a suggestion and began exploring the idea of joining the Jellystone franchise.

“Around October of 2010, I started randomly calling Jellystone parks, told them who we were and asking, ‘Would you recommend it? What do you like?’ those sorts of things,” Stafford said. “And all of them were singing out of the same hymnal: ‘It’s the best thing we ever did, we couldn’t be happier,’ that sort of stuff.”

After touring another Jellystone park in the area, sitting in on a Yogi Advisory Council (YAC) meeting and traveling to the Jellystone Park of Western New York for more tours, Bowyer and Stafford took the plunge in 2011 with Leisure Systems Inc. (LSI), the Milford, Ohio-based franchisor of the Jellystone network, and Rustic Creek Ranch became a Jellystone franchisee.

For Stafford, one of the things that made the biggest impact was hearing about the strong family atmosphere at other Jellystone resorts.

“We drank the punch,” Stafford joked. “It wasn’t long before we were also singing from the Jellystone hymnal.”

With the uptick in their business, it’s easy to see why.

“Joining Jellystone has catapulted our length of stay, our number of camper nights and the number of people in the park,” Stafford said. “We’ve had months anywhere from 10 to 28% revenue increase. We’re doing wedding and corporate groups and all those things took off as well.”

The infrastructure and support network of the franchise and other franchise owners played a vital role in that success, he explained.

“We got just tons and tons of support not only from the franchise itself, but from the other parks,” Stafford said. “So we decided to add on a water park in 2012. Now we’re expanding that to pretty much triple the size.”

The rapid growth has also considerably ramped up staffing levels. Stafford said the park currently employs around 50 staff members, but expects that number to rise to 250 during the summer after the waterpark opens. Their current visitor projection for the waterpark alone is roughly 35,000 people per summer.

With general admission ticket prices at $12.99 as well as ancillary concession sales, reaching that visitor goal would mean helping to recoup the expansion investment within a few years.

On the RV Side

With all the focus on the entertainment complex and event planning, it would be easy to neglect camping, the original bread-and-butter business of the North Texas Jellystone, but Stafford said they are committed to improving and expanding that aspect of the resort as well.

Even with the huge waterpark addition and the nearby Interstate highway, the park still boasts a lot of wooded beauty with 72 acres of mature trees, and the park and keeps adding more ways for people to enjoy it.

“We’ve continued to add cabins and rental RVs, so those options keep expanding,” he said. “And we still offer tent camping, which keeps the customer base very broad. That’s something that may set us apart from Great Wolf Lodge and some of our other peers in the industry. A customer can have a tent site at our property for $25 or a deluxe lodge up to $237. We can get into that price range for families.”

In addition to offering a diverse range of lodgings, Stafford said they have begun experimenting with techniques not traditionally used in campgrounds to take advantage of the seasonal surge of supply and demand. Specifically, taking a page from the hotel and airline industries, they brought in a consultant to help them implement a revenue management system.

“I think campgrounds could definitely get into this,” Stafford said. “It’s where you raise or lower the rate depending on compression or those periods of full occupancy. For example, it’s the same concept as how two people wouldn’t pay the same price for airline tickets or hotels depending on when they make the reservations.”

While some in the outdoor hospitality sector might balk at the idea of not offering a set rate regardless of the date of booking, Stafford believes that customers are getting used to the concept that the early bird gets the worm when it comes to rates.

“We meet every week and decide whether we need to go up or down on pricing,” he said. “If you’re full already, it’s kind of hard to maximize revenue, but you can hold back maybe ten or so sites during the busy season and then wait to sell those until you get a couple weeks out, then sell them at a premium, add $10 or $15 to those campsites. It’s kind of new thinking within the campground industry.”

As for marketing, Stafford said that the park does give a lot of attention to their web presence and improving their search engine optimization (SEO), but according to their surveys, they are still generating more visitors through traditional means.

“We’re right off the freeway on I-35W, so we get about 60,000 people a day that drive by,” he said. “According to our survey our top three traffic generators are, first, drive-by, then friends and word of mouth, and then the website.”

People Over Buildings
While it’s certainly evident that the leadership of North Texas Jellystone believes in heavy infrastrucutre investments to elevate their mega-park to ever-more-mega standards, Stafford emphasized that people are an even bigger component in their formula for success. 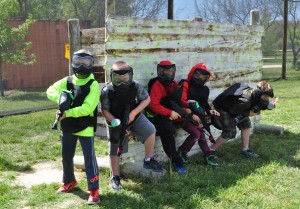 “I think it’s important to empower your people to grow and get better than they were last week,” he opined, by doing things like “taking them to conventions, giving them articles, inviting people into speak. I want my people to be able to make decisions on the fly and to get to the point to where they don’t need me.”

Like many campground operators, it’s also the people that Stafford finds most rewarding about the work.

“Working with the staff on a daily basis and building a great team is one of the most rewarding aspects for me,” he said. “And seeing the families enjoy themselves is the other, just seeing happiness and kids being able to get messy and it’s okay, the hayrides, those types of things.

“We’ll continue to do customer service training to get better. It’s not me and it’s not the owner, it’s all those people that make the park run,” Stafford explained. “Every one of those people is very important to the success of our park — and any park. ”

Camping cabins: A variety of options available, from rental RVs to rooms in the on-site bunkhouse and farmhouse, as well as several types of cottages. Rentals start at $59/night low season, up to $300/night high season.
Website: www.northtexasjellystone.com