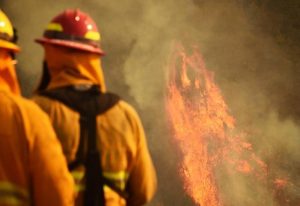 In this photo provided by the Santa Barbara County Fire Department, firefighters keep an eye on flames as pockets of unburned vegetation flare up off Bella Vista Dr. in Montecito, Calif., Wednesday, Dec. 13. A Cal Fire firefighter died while fighting the Thomas Fire, officials confirmed Thursday.

California’s Thomas Fire grew to 249,500 acres Thursday (Dec. 14), and crews were able to increase containment to 35%, according to Cal Fire.

According to The Tribune, more than 8,300 fire personnel have been assigned to the blaze burning in Ventura and Santa Barbara counties — already the fourth largest wildfire in California history. It has destroyed 974 structures and damaged 258.

Cal Fire reported the majority of resources in Santa Barbara will focus on securing the western side of the fire above the coastal communities in the county.

In Ventura County, crews are engaged in suppressing active and small spot fires around the southeastern portion of the perimeter.