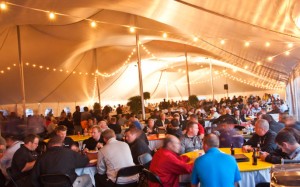 As the clock ran down Thursday (Sept. 20) on Elkhart County’s 5th Annual RV Open House Week in and around Elkhart, Ind., exhibiting RV manufacturers were assessing the results of a crazy week that drew thousands of U.S. and Canadian dealer personnel to Elkhart County’s boulevards and side streets for a taste of Indiana hospitality and a good look at the industry’s new 2013 models.

And the initial Open House assessment over at Thor Industries Inc.’s sprawling divisional display at the RV/MH Hall of Fame was decidedly positive, especially since the rains let up on Tuesday afternoon. In fact, Thor President and COO Bob Martin was pleased to see an increase in pre-registered retailers as well as non-registered dealers who showed up unannounced at Thor’s Open House display.

Given the strong sales last week at the Pennsylvania RV & Camping Association’s Hershey Show, however, Martin pretty much saw it coming. “Everybody has really liked the changes in products in every division,” said Martin. “For me, I’ve been pleasantly surprised. We expect it (positive attitudes). But until you get here and hear from the dealers, you never know. So, to see a lot of dealers smiling and, you know, talking about ordering, it’s a good sign for the fall.” 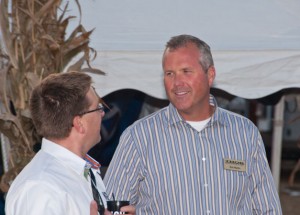 “I think Open House has been an even bigger success for us and the (other Thor) companies than in years past,” Emahiser reports. “It get’s bigger every year. Expectations get bigger, and we’ve really surprised ourselves with the performance, I guess, not only for the CrossRoads and Redwood team, but for everybody here at the Thor display. So, we’ve had a real fun week, at least the last couple of days, and we’re looking to end strong as well.”

“Dealers’ attitudes have been really good, especially for an election year,” he added. “You know, you get a little bit of hesitation thinking that it won’t be as good as you expect. But, again, we’ve been really surprised how strong orders have been as well as the attitudes of the dealers and lenders. Again, it’s been a really fun couple days.”

“Well, it’s certainly exceeded our expectations, not only in traffic, but just the amount of dealers who came in and placed orders and are excited about all the product changes that we introduced this week,” said Zimmerman. “There’s no question that people are very optimistic with everything that they’re seeing in this latter part of the season, and that’s obviously encouraging. 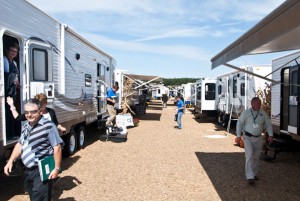 “You know, when you’re in a display and you’re showing product, whether it’s at Louisville or Open House,” he added, “we don’t always gauge how well we did on orders, even though that’s a big part of it — and we are extremely excited about how we came out of the Open House in terms of orders. But it’s that buzz and what dealers are saying about your product compared to a lot of other competitors that also counts. And we had all of it. So, for us at Keystone, we’re just tickled. We’re almost pinching ourselves.”

Same goes for Chris Hermon, president since May of Thor’s Heartland RV LLC division headquartered in Elkhart. “The dealers are here to do business, which we’re thrilled about here at Thor,” says Hermon. “The first day and a half, with the weather, was a little bit of a challenge. But the dealers have been here in a big way and they’re loving what they’re seeing in our display. It’s a huge push from where we’ve (Heartland) been, and I’m excited about that because product drives everything. So, things are looking good.”

“Yeah,” said Martin, “our (exhibit) space at Louisville’s consistent with what we had last year, and all of the divisions will probably hold a few things back from the Open House for Louisville just to create some excitement there. So, for us, as long as the dealers see value in Louisville relative to the Open House, we’ll support it. The dealers are going to decide over the next few years which way things will go with regard to trade shows. And as long as Louisville’s a show, we’ll be there with a great presence from all the Thor divisions.”