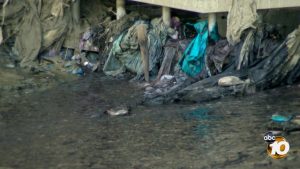 “This has been going on for 40 freakin’ years,” exclaimed Christopher Harris, who is also the director of legislative and political affairs for Local 1613.

According to 10News, Harris questioned a recent announcement to use $1.6 million to build a campground in the valley.

“You want people to come down and they’re going to be sleeping on the ground, walking through it, I mean as close contact as you can get with it,” he asked. “Look if they want to do that, the union’s not going to adamantly oppose them on that one but we still think it’s foolish.”

The campground is one of San Diego County Supervisor Greg Cox’s projects to improve the Tijuana River Valley.  A spokesman for his office told 10News plans for the campground are way off and the supervisor realizes an environmental study and cleanup must be conducted first.