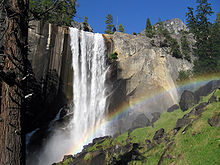 A view from Mist Trail of Vernal Fall in Yosemite National Park.

The body of 6-year-old Jacob Adams was recovered Thursday (Aug. 23) from the Merced River approximately 50 yards downstream from the Vernal Fall Footbridge beneath Yosemite’s 317-foot Vernal Fall, according to a National Park Service press release.

Examiner.com reported that Jacob and his 10-year-old brother, Andreas “Andy” Adams, were sucked into the fast flowing river while wading with other family members near the Vernal Fall footbridge on Aug. 15. This roiling section of the Merced River – which consists of large boulders, chutes and small waterfalls – is notoriously dangerous and the current deceptively swift.

Jacob and Andreas, along with their family, were visiting the popular California national park as part of a camping trip organized by the Calvary Chapel East Anaheim (CCEA), located in Orange County in California. Although Andreas was quickly pulled from the river by a park visitor – some 150 yards below the footbridge – efforts by both the visitor and a National Park Rangers to resuscitate the young boy proved unsuccessful. Sadly, an intensive search of the river from the Vernal Fall Footbridge to Happy Isles also failed to locate Jacob.

According to a blog post authored by Pastor Bob Kopeny of the CCEA, both Char Adams (Jacob’s mother and Andy’s stepmother) as well as Josh Reish (Jacob’s older brother) were subsequently hospitalized due to the injuries they suffered as they attempted to rescue the boys.

The Adams family was staying at the 365-acre Sugar Pine Christian Camp – located on Mill Hurst Road in Oakhurst just outside the park. The campground – which actually consists of two facilities; Camp Sugar Pine and Timber Mountain – includes a Chapel, Friendship House, Dining Hall and a variety of cabins and lodges.

There were six water related deaths in Yosemite National Park in 2011. Three hikers were killed when they were swept over the Vernal Fall on July 19, 2011 and it took over four months to recover the body of the last missing hiker. Two hikers drowned in the Hetch Hetchy Reservoir on June 29, 2011, and a hiker slipped and fell into the Merced River on the Mist Trail on May 13, 2011.