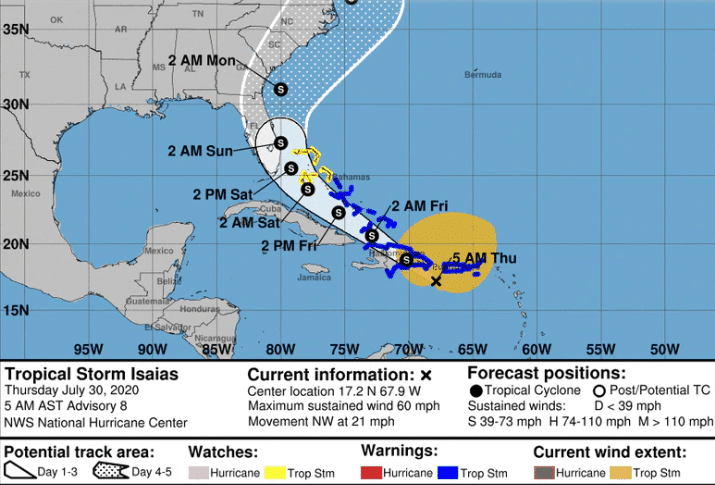 Tropical Storm Isaias, which became the ninth named storm of a busy 2020 hurricane season late Wednesday (July 29) night, saw its forecast track make a small move to the east in today’s 5 a.m. advisory from the National Hurricane Center, the center of that track keeping the core of the storm slightly off the shores of South Florida, according to the Sun Sentinal.

All of South Florida, however, remains in the forecast path of a storm that had tropical-storm-force winds extending up to 415 miles from the center in the latest advisory.

A move of the path to the east has occurred in each of the past three full advisories (since 5 p.m. on Wednesday). The system is projected to remain a tropical storm for its foreseeable duration (maximum sustained surface winds ranging from 39-73 mph).

In that 5 a.m. advisory, the storm was moving northwest at 21 mph and was about 100 miles west-southwest of Ponce in Puerto Rico and about 160 miles southeast of Santo Domingo in the Dominican Republic with maximum sustained winds of about 60 mph.

It is expected to continue aiming northwest with a dead-center pass over Hispaniola (the island that comprises the Dominican Republic and Haiti), contending with mountains as high as 10,000 feet.

Isaias is expected to continue on a northwest track until it reaches Florida, where a turn north is anticipated.

Tropical-storm-force gusts could arrive here as early as Friday night, but Saturday is much more likely, NWS Miami said Wednesday. The wind field is massive, with tropical-storm-force winds extending up to 415 miles north from the system’s center.

South Florida’s chances for experiencing tropical-storm-force winds (speeds of at least 39 mph) stand at 15% to 25% in the next five days, the weather service said.

It also said that “ahead of any impacts from the (impending) tropical system, most of the rainfall this week will be over the interior and Gulf coast of southern Florida,” with rain chances increasing for Florida’s east coast on Friday.

As the storm had been forecast to become a named entity on Wednesday, Thursday is expected to see it weaken as it goes over the storm-disrupting mountainous terrain of Hispaniola, with some restrengthening possible late this week.

There have been four other tropical storms so far this month: Edouard, Fay, Gonzalo and Hanna. Other named storms this year have included Arthur, Bertha, Cristobal and Dolly. Tropical Storm Arthur formed in mid-May, making this the sixth straight year that a named storm formed before the official start of hurricane season on June 1.

So far, Hanna has been the only hurricane of the season, striking Texas late last week as a strong Category 1 storm.