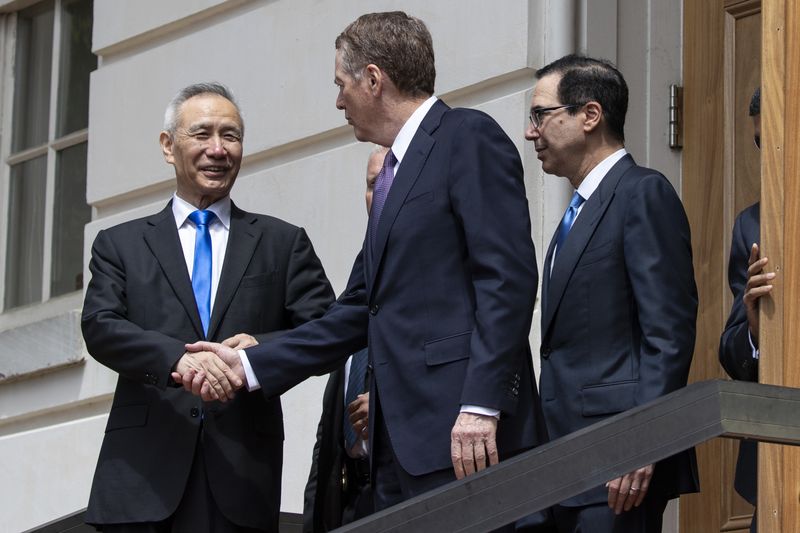 Liu He meets with Robert Lighthizer and Steven Mnuchin in Washington on May 10.
China and the U.S. announced that face-to-face negotiations aimed at ending their tariff war will be held in Washington in the coming weeks, amid skepticism on both sides that any substantive progress can be made.

Bloomberg reported that Chinese Vice Premier Liu He agreed to a visit in “early October” during a telephone call on Thursday (Sept. 5) morning Beijing time with U.S. Treasury Secretary Steven Mnuchin and U.S. Trade Representative Robert Lighthizer, according to a statement from China’s Ministry of Commerce. A cautious statement from the USTR’s office confirmed that ministerial-level discussions will take place in “the coming weeks,” without specifying when.

Any meeting in the immediate future would take place against the threat of increasing U.S. tariffs on Chinese goods, as President Donald Trump’s administration is set to ratchet up levies on Oct. 1 and in December. A rapid deterioration in relations last month has left global investors reeling amid increasing evidence that the conflict is harming the economy in both nations.

“Neither China nor the U.S. want to be blamed by the rest of world for escalating the trade war and damaging the world economy,” said Zhou Xiaoming, a former commerce ministry official and diplomat. “But the talks don’t mean the two sides will inch closer or that their stances soften.”