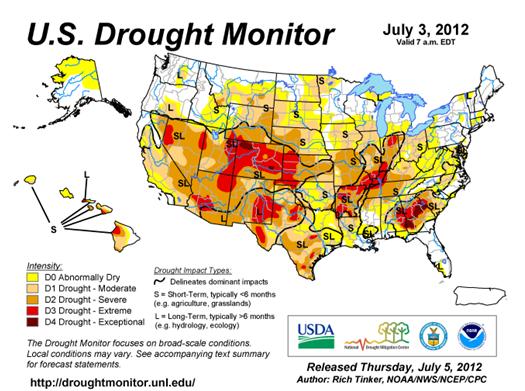 The extent of the nation’s drought worsened from last week, according to a quick look at the Drought Monitor released today (July 5) by the U.S. Department of Agriculture. A summary follows:

Overall, this week featured the expansion and intensification of dryness in large sections of the country, with only southern Texas reporting some improvement. Light precipitation (0.5 inch or less) fell on most areas of dryness and drought, with only scattered areas reporting more than an inch, primarily in the northern Plains, lower Mississippi Valley, southernmost Great Lakes region, Appalachians, mid-Atlantic region, and southern Texas. This despite a couple of thunderstorm complexes that pushed rapidly from northern Illinois east-southeastward through the mid-Atlantic, including one on June 29 that caused significant damage, knocked out power for millions of customers, and took 2 dozen lives.

Unfortunately, where rain did fall (outside southern Texas), it was not enough to make up for blistering heat that covered the nation’s midsection, reaching the central and southern Atlantic Coast by the end of the workweek. Both the number of record highs in the past week, and the areas with record and near-record dryness over the last 1 to 3 months, are too numerous to mention. Daily high temperatures averaged above 100 degrees in the central and upper southern Plains, extending eastward into parts of Missouri and Arkansas, and average temperatures for the week were 8 to locally 15 degrees above normal from the Ohio Valley and upper Southeast westward through most of the High Plains.

The dryness is beginning to take a significant toll on some of the nation’s crops, pastures and rangelands. In the primary growing states for corn and soybeans (18 each), 22 percent of the crop is in poor or very poor condition, as are 43 percent of the nation’s pastures and rangelands and 24 percent of the sorghum crop. In addition, the area scorched by wildfires expanded significantly. Over 1.9 million acres have been engulfed since the start of the year, an increase of 38 percent in just the past week.

Looking Ahead: In general, July 4 – 8, 2012 doesn’t look promising in terms of relief, though the intense heat should subside somewhat. One area that could see relief would be from the central and southern Rockies into the northern Plains, much of which is forecast to receive over an inch of rain. Totals near or above 2 inches are expected in the central Dakotas. One to perhaps 3 inches are also anticipated along and near the central Gulf Coast. Elsewhere, light rain at best is expected, with little or none forecast for the lower Northeast, the mid-Atlantic region, the upper Southeast, the Ohio Valley, much of the Mississippi Valley, and the central and southern Plains. Seasonably dry weather is expected in the West. Modest improvement is forecast for most areas that have endured the recent heat wave, but most locations from the Plains eastward are still expected to be warmer than normal. Temperatures could average over 6 degrees above normal from the mid-Atlantic region westward through the Tennessee and Ohio Valleys to near the Mississippi River.

The ensuing 5 days (July 9 – 13, 2012) bring enhanced chances for below-normal rainfall from the Tennessee and middle Mississippi Valleys northward through the Appalachians, Great Lakes, and northern Great Plains. In contrast, the odds favor above-normal rainfall along and near the southern half of the Atlantic Coast and in the southern halves of the High Plains and Rockies. Below-normal temperatures are expected to settle into the Northeast, but continued above-normal temperatures are anticipated in the southern halves of the Mississippi Valley and eastern Plains, and from the northern Plains, the central Rockies and the desert Southwest westward to near the Pacific Coast.