Recreational activities continue to be a mainstay of the American lifestyle and economy, according to the American Recreation Coalition’s new report Outdoor Recreation Outlook 2018.

According to a press release, outdoor recreation industry leaders report good sales and increased activity for 2017 and project still stronger activity in 2018.  Americans spend more than $887 billion annually on equipment ranging from skis and tents, to RVs and boats, and on services ranging from fishing licenses to zip lines, supporting millions of jobs in manufacturing, sales and service.

A core strength of outdoor recreation in America is the lure of America’s public lands and waters, covering nearly one-third of the nation’s surface.  Best known is America’s National Park System with 400-plus units, ranging from world-renowned destinations to small historic sites.

Visitation is on the rise, up 7.7% from 2016 levels, with 23.7 million more visits year to date.  Many of the 330-plus million visits to national parks rely upon services of national park concessioners, including lodging, food, retail, transportation and guide services.

Recreation.gov – the unified means for making reservations on all federal lands – reports 19 million users and 37 million sessions in 2017, up 26% and 22% respectively.  The inventory of federal reservable facilities also increased to 3,367 sites.  The steady growth in use of Recreation.gov leads its operators to anticipate a continued climb in visits due to increased inventory, support of high-profile events and locations, and targeted marketing strategies. 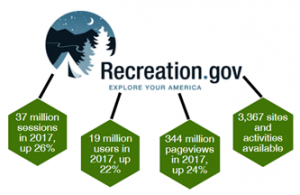 Adding to this positive outlook for public lands and waters are recent initiatives announced by U.S. Secretary of the Interior Ryan Zinke.  He is harnessing the experience and know-how of the recreation industry by forming the Recreation Advisory Committee and engaging with industry groups like the Outdoor Recreation Industry Roundtable to examine how public-private partnerships can expand access, inspire innovation, improve infrastructure and more.

This renewed emphasis on outdoor recreation is creating new opportunities for Americans everywhere to enjoy their great outdoors.

State park visitation trends also continue to reach record levels.  Collectively, America’s state parks hosted more than 790 million visitors in 2016, 373 million of which were to fee-collecting areas.  State parks now report an inventory of more than 240,000 campsites, of which about one-third are seasonal.  Of the nearly 66 million overnight visitors to state parks in the past year, over 61.4 million were by campers.

Kampgrounds of America Inc. (KOA) – the nation’s largest private campground system – reports a very strong year across the board.  According to KOA’s 2017 North American Camping Report, camping remains one of the most popular, affordable and accessible pastimes in North America.  An estimated 13 million U.S. households planned to camp more in 2017 than they did in 2016, and more than one million new households have started camping each year since 2014.