Areas of the U.S. covered with snow on Jan. 1 are shown in this graphic courtesy of AccurWeather.com.

AccuWeather.com reports with 67% of the contiguous U.S. covered by snow, the first day of 2013 marked the widest coverage of snow the U.S. has seen on Jan. 1 in the past 10 years.

The previous record was set in 2010, when the new year saw 61% of the U.S. beneath snow. That same season was marked by the blizzard nicknamed “Snowmageddon,” in the mid-Atlantic, which set a long list of records in cities such as Philadelphia, Washington, D.C., and Baltimore.

The lack of snow coverage since record keeping began in 2004 (see chart at right), with the exception of 2010, has been an anomaly, Boston explained. 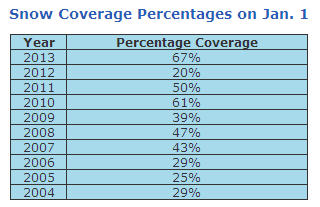 “The temperature of the North Atlantic ocean has been in a warm cycle and that has resulted in eastern North America, on average, having milder temperatures during the last decade.”

Despite a few local locations, most of the contiguous U.S. was above normal in snow coverage for the month of December as well.

The percentage of coverage differs drastically between the two months, however.