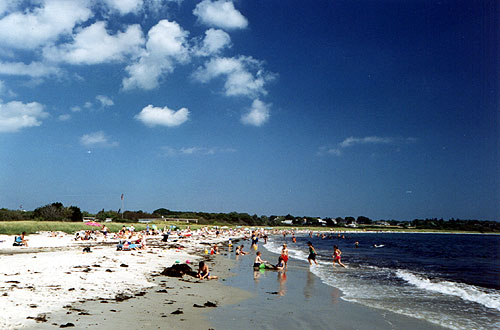 The Maine State Employees Union has joined the debate over the fate of Crescent Beach State Park in Cape Elizabeth.

The union started a petition drive last week urging Gov. Paul LePage to sign a lease deal and opposing any move to privatize the 187-acre park on the Atlantic Ocean. The union said revenue from the busy park is used to support other state parks, the Morning Sentinel, Showhegan, reported.

The state’s lease on land that makes up more than half of Crescent Beach State Park will expire early next year, and negotiations for an extension have stalled.

State officials are considering a new place for the entrance to the park because the leased land — owned by the Sprague Corp. — includes the entrance off Route 77. The company is considering operating a park on its land.

State and company officials talked about a state purchase of the Sprague Corp.’s land, but those discussions fell apart after LePage said he doesn’t want the state to take on more debt before it pays down some of its long-term obligations.

The state employees union says the governor’s position signals his intent to privatize the park, as he did with the Fort Knox site in Prospect.

A release from the union read, “After privatizing the state’s Fort Knox Historic Site, Gov. LePage and Conservation Commissioner Bill Beardsley now appear willing to put the revenues of the entire state park system at risk. Instead of renewing the state’s expiring lease for Crescent Beach State Park in Cape Elizabeth, Gov. LePage and Commissioner Beardsley seem to be moving in the direction of privatizing this enormously popular beach attracting over 100,000 visitors a year.”

Jeanne Curran, spokeswoman for the Department of Conservation, said the state is looking at all options, and the fact that a deal wasn’t done “didn’t mean that the state was leaning toward privatization.”

“The governor is very much in support of public access,” Curran said.

The Sprague Corp. owns 100 of the 187 acres that make up the park, including the entrance, a portion of the road that leads to the parking lot, about a third of the parking lot and about a quarter of the beach.

The state has leased the land since about 1960, but its free lease ran out in 2010. Since then, the lease has been extended on an annual basis. The current agreement runs out in April.

The chairman of the Sprague Corp. is Robert C.S. Monks, an owner and director of MaineToday Media, parent company of the Portland Press Herald, sister paper to the Morning Sentinel.

Crescent Beach State Park is among the most popular beach parks operated by the state, drawing about 110,000 people a year, according to the Department of Conservation.

The state and Seth Sprague, president of the family-owned company, began talking about the state buying the land when the long-term lease lapsed a couple of years ago. A price was never discussed.

Sprague officials say the town of Cape Elizabeth has estimated that the entire parcel is worth $16 million. Sprague has considered running the park for the state, as it does at Scarborough Beach State Park.

Workers at that park are employed by the company, which pays the state 5 percent of gross revenue as rent, according to Sprague.

Both sides are preparing for the possibility that no agreement on Crescent Beach will be reached.

The state has said it must determine where an access road can go without disturbing wetlands or sensitive areas of the park. Sprague has said the company will likely operate its land as a separate park if the talks fail. The family has ruled out selling the land for house lots.

“I’ve been hearing concerns from businesses and people in our community for weeks now,” said state Rep. Kim Monaghan-Derrig, D-Cape Elizabeth. “People are very worried about how this will impact our environment, local jobs and tourism here, not to mention the rural parks that rely on the funds brought in from higher-usage state parks like Crescent Beach. This isn’t just about Cape Elizabeth, this is about the future of state parks across Maine.”