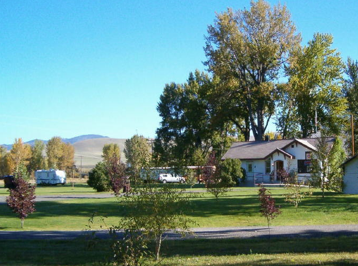 Riverfront RV Park, not your normal little RV park in the Montana wilderness.

Winter’s coming on at the junction of the Clark Fork and Little Blackfoot rivers in northwest Montana, and you’d think things would be buttoning up and slowing down at Bernie and Sharon’s Riverfront RV Park.

Bernie Schillo laughs at the notion.

“So you want a story?” he said when strangers knocked at his door Thursday morning. “How long have you got?”

Turned out, not nearly long enough, Missoula’s The Missoulian reported.

Schillo is chairman of the board of the two-room school on the hill, where wife Sharon works as an aide. He’s proud of the school and its teachers.

“We have people bringing their kids from (Deer Lodge) to go to the Garrison School,” he said.

Schillo, 57, has a plumbing business, though he said he’s “mostly retired” from it.

He’s a board member and volunteer for a Garrison fire department that’s “always on the bottom of the food chain.”

A decade or more ago, Schillo heard a voice that led him to become a man of the cloth.

“If I tell that story people will commit me,” he said.

Now he’s pastor of the growing Chapel at Riverfront Park.