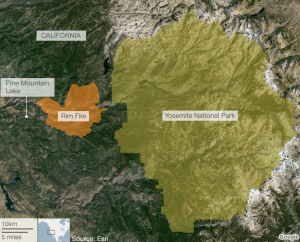 The Rim Fire destroyed forests in a national forest and a national park. But how firefighters fight the fire is different in these two adjacent regions. Map courtesy of the U.S. Forest Service.

As the massive Rim Fire roared out of the Stanislaus National Forest and deeper into Yosemite National Park this week, public attention rose sharply.

But the intensity of firefighting did not, the Los Angeles Times reported.

That’s because part of the blaze had crossed into the jurisdiction of the National Park Service, which has a more restrained approach to managing wildfires than other federal, state and local fire agencies battling the 300-square-mile blaze.

Officials estimate that it will be fully contained in two or three weeks, but it is expected to keep smoldering for weeks longer and won’t be truly out for months.

“This fire will burn until the first rains or until the snow flies,” said Lee Bentley, a spokesman for the U.S. Forest Service.

Although the 4,900 firefighters here operate under a unified command, the park service has a very different firefighting philosophy from that of the forest service or the California Department of Forestry and Fire Protection.

The portion of the Rim Fire burning outside the park is fought aggressively by the forest service and Cal Fire. Bulldozers rip fire lines across the landscape, and crews fell trees and set protective backfires. Helicopters and tanker airplanes drop water and retardant.

“We want to send as much equipment to a fire as we can,” said Cal Fire spokesman Daniel Berlant. “Our goal is to put it out early and avoid having a large fire.”

But inside parks, a policy often called “fire use,” accepts fire as a naturally occurring process and often a useful tool.