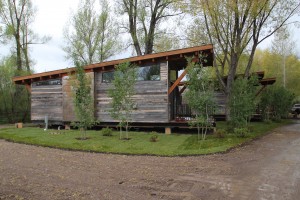 Mackay and Hedges have formed a manufacturing firm, Wheelhaus Inc., to build the trailers in nearby Alpine, Wyo., and transport them to their park, located in Wilson.

In an interview with Woodall’s Campground Management, Hedges, who is the partnership’s director of business development, explained that these upscale trailers are targeted for a new generation of campers who prefer “glamping” or glamorous camping to traditional camping in tents or even standard RVs.

The recreational park trailers would sit on sites currently designated for RVs. The trailers would either be parked permanently or for months at a time. Stays would be limited to 30 days.

“The idea is, a lot of companies are building RPTs, but no one is building high-end luxury,” he said. “This will be nature camping at its finest.”

They call their design “The Wedge.” The roofline starts low over the bedroom and builds to 15 feet in front with big glass windows, allowing guests to look right out at the Tetons. Some of the siding is made of reclaimed snow fences.

“We’ve got a full kitchen with custom countertops and cabinetry, hardwood floors, high-end Regency gas burning fireplaces with custom butcher block mantels and 41-inch HD TVs. The bedrooms host king-size beds and ‘his and her’ closets and the bathrooms feature antique granite flooring. Each unit will include a 10-foot deck in front and private campfire patio off the deck.” 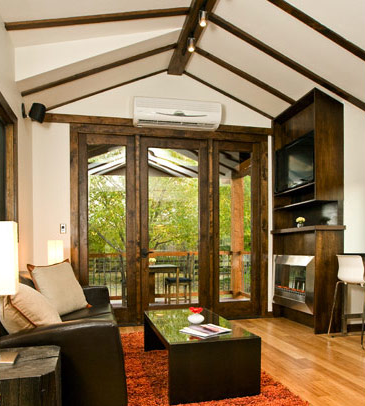 Interior of a park trailer at Jackson Hole Campground

“It’s our opinion campgrounds are going through an evolution; a lot of the traditional business models aren’t working quite as well,” he said, explaining the need to look outside the box.

The partners plan to begin major production of the high-end park models and make them available to other campgrounds nationwide. The units will sell for approximately $100,000, he estimated. Production could be moved to a new site to accommodate transportation of the finished units by rail, he added.

In the meantime, they have options to purchase four other unnamed campgrounds in the West. They plan to follow a similar business model at any additional parks they acquire.

The partners also plan to install high-end tents in what they call “The Garrison” at their campground for the 2012 season.

The owners expect 100% occupancy of their new park trailers from June through mid-September and 50% for the rest of the year. They’ll be open during the winter ski season.

Just before a hearing in May, the Jackson Hole News and Guide reported, Mackay said the trailers are part of his new “Green Camping” initiative, a major component of the campground’s efforts to improve and evolve.

For example, use of the trailers would reduce fuel consumption by 687,635 gallons and carbon dioxide emissions by 8,245 tons per year, according to a study of 506 random RV guests during summer 2010.

Additionally, Mackay said he aims to use 100% purchased wind power, and he plans to reclaim unnecessarily disturbed areas on the property by seeding or sodding with native grasses and to plant 100 new trees on the site.

“The trees will be placed mostly along the border of the property in a continued effort to shelter and privatize the property from adjacent properties and homes,” a release stated. “This will benefit both neighbors and guests alike.”

The Jackson Hole Campground is one of at least three parks in Teton County that propose to add park models. More than 100 park models in all are proposed for the Buffalo Valley RV Resort and as many as 17 have already been approved for the Snake River Canyon KOA. Click here to read a comprehensive study of the Buffalo Valley RV Resort’s plan, which has received a positive recommendation from the county plan staff.

Hedges and Mackay have yet to receive the county’s official blessing to move forward with their ambitious project, estimated to cost some $7 million. Neither do they have the OK to remain open year-round. But Hedges says he and his partner are undeterred.

“We feel this property may very well be the most attractive, high-end campground in the entire country,” Hedges said. “Our opinion is, this is a use by right. RPTs are in use all over the country. When the county asked us to go through a conditional use application, we said we would do it but consider it a use by right.

He continued, “It’s a very simple argument. Teton County tried to overcomplicate things. An RPT is defined as a recreational vehicle. They’re allowed in RV parks. We don’t see why we should be regulated.”

Hedges noted that the campground has operated on a year-round basis since at least the 1960s. “We have a zoning certification verification from the county approving that.”

The Teton County Plan Commission has OK’d plans for one of the campgrounds, Bud Chattham’s request for Snake River Canyon. Chattham got approval in mid-May for up to 17 park models, with restrictions. The units must be set back from the river and they must be for seasonal use only, according to Jeff Daugherty, county planning and development director.

The commission tabled a request from Buffalo Valley RV Resort owner Harry Washut and has yet to hear an appeal from a resident on Jackson Hole Campground before rendering its decision.

Washut proposes to put more than 100 park models in his 200-plus site park, located near the south entrance to Yellowstone National Park.

Before acting on the Jackson Hole Campground’s plan, however, the county must first hear the appeal. A resident, Gail Jansen, appealed an earlier decision by Daugherty. Because of that appeal, it stays further action until it is resolved. That issue must be resolved within 30 days.

So, what’s the holdup?

“We’re struggling what to call these things and from a land use how to classify them,” Daughterty said. “We’re calling them RVs, but they have a greater land use impact than a motorhome.”

“What we want to do is avoid creating de facto lodging. We have a lodging overlay zone here,” Daugherty said.

“Our commissioners are interested in testing the water, seeing how it works and then maybe welcoming requests later on,” he said.

Daugherty said the county will not sit idly by if Mackay and Hedges flaunt the law. He told WCM he learned that the owners were bringing in the first shipments of park models before Memorial Day and beginning to set them up. He said he was sorry to learn that Mackay and Hedges were going forward without county OK.

“Initially the first volley rests with me,” Daugherty said about the next step. “I would bring an abatement action against him, saying he has been deemed in violation of land development regulations and he has a certain number of days to correct them. If he fails (to correct them), we go to district court where we can seek fines up to $750 per day per violation.”

Daugherty said Mackay is well aware of his options. Hedges agreed, adding that he and his partner are more than willing to work with the county to find a compromise so as to expedite their request.

Daugherty went on to say that the county has been diligent and is on schedule with all of its deadlines concerning the case. “I think he was waiting on Bud Chattham’s case to see what would happen,” Daugherty said.

Panoramic view of the Grand Tetons from Jackson Hole.