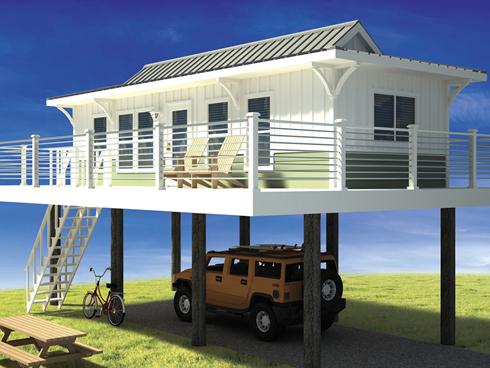 Editor’s Note: The following column was written by Kitty Bean Yancey and appeared in USA Today.

Imagine staying in a brand-new beach house on stilts at Cape Hatteras, N.C. Park your car underneath, Carolina beach-house style. You have a deck, gas grill, microwave, AC, flat-screen TV and linens included.

You can swim in the ocean or a community pool, sing karaoke or attend a pancake breakfast.

Where are you? At one of the Kampgrounds of America, staying in a “Deluxe Sky Cabin.” Due to be ready in May, they start at $130 a night ($180 in peak season). That’s equivalent to the price of many so-so beachfront hotel rooms.

As it celebrates its 50th anniversary this year, KOA — with almost 500 locations in North America — is everything from a place to pitch a tent, park an RV or stay in a “luxury lodge.”

KOA chairman and CEO Jim Rogers tells me that despite crazy gas prices, advance reservations (he calls them camper nights) are “up about 4.4 percent ” vs. the same time last year, and “that’s significant,” he says. “People are adapting to the price of gas.”

But he says that more than 50 percent of campers tend to come from home that night, way up from five or six years ago. That’s a clear indication that trips are shorter.

He also says a good portion of KOA campers want community and “more of an entertainment experience.” Therefore, ice cream socials, bingo, movies shown on inflatable screens, karaoke and pancake breakfasts are on the KOA roster.”

Call me a party pooper — when I camp I stick with my group. But Rogers is passionately certain that many KOA guests seek a “small hometown experience. Our society seeks genuine engagement” after “living our lives” in tweets, Facebook posts and texting.

Rogers used to be a gaming exec, so I had to ask him whether the proliferation of casinos means gambling could soon be added to the KOA social-activity roster. “No way,” he says. His goal, he states, is to get more people outdoors.