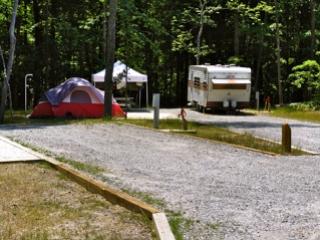 Do state park campgrounds unfairly compete with private campgrounds? A bill in last year’s Virginia General Assembly suggested the answer might be yes. A new study says no.

According to a report by the Fredericksburg.com, the Board of Conservation and Recreation, which oversees the state parks, last fall commissioned Virginia Tech’s Pamplin College of Business to do a report on what motivates campers to choose where to camp.

The report suggests that campers make choices based on a variety of factors, but that the price of a campsite does not rank highly as a factor that drives a camper’s choice.

It also says that the more camping amenities there are in an area, the more likely it is that people will visit that area to camp.

The report has been posted on the website of the Virginia Association for Parks, an organization that covers various state parks support groups and opposed legislation in last year’s General Assembly that would have limited public parks’ offerings.

The question of competition between private and public campgrounds was first raised publicly by those bills, filed in the 2012 legislative session by Virginia senators Bryce Reeves, R–Spotsylvania, and Tom Garrett, R–Louisa, and Delegate Peter Farrell, R–Henrico.

The bills were spurred by Bill Small, who runs Small Country Campground in Louisa County and feels that state parks unfairly compete with private campgrounds, undercutting them with low fees and offering comparable hookups to attract large RVs, rather than just primitive camping spaces.

According to the Virginia Tech report, in October, “a private campground owner, who is an appointed member of the board, made a presentation to the board [asserting] that there is competition between public and private providers of camping and that the fees charged for camping in Virginia state parks undercut the private campgrounds.”

It doesn’t identify Small as that board member, but as a result of the presentation, the board decided to ask a third party to review the issue of competition between public and private campgrounds.

The Virginia Tech report was done by Vincent Magnini, a professor in the school’s hospitality and tourism management department. Magnini’s report says that the public prefers a variety of camping options, and that people’s decisions about where to camp may change depending on what they want from the camping experience.

“Because campers possess varying motivations in their camping experiences, particular customer segments are prone to be attracted to certain types of campgrounds that best match their motivations,” the report said. “In other words, a campground cannot be all things to all people.”

Price, the report said, is just one of many criteria—people also consider shade, proximity to water for fishing, isolation from other campsites and other factors.