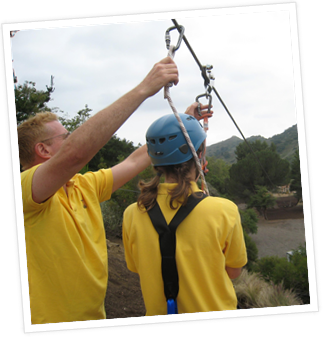 The Ventura Ranch KOA has an 800-foot-long zip line, likely the one company CEO Jim Rogers will be shown riding on during tonight’s episode of “Undercover Boss” on CBS TV.

The Ventura Ranch KOA Campground outside Santa Paula, Calif., will be featured in tonight’s episode of the CBS reality show “Undercover Boss.”

“The Ventura Ranch KOA location is pretty spectacular visually,” Chris Carlson, the show’s executive producer told the Ventura County Star. “It looks gorgeous, and it’s close to the beach. It’s the most beautiful campsite in KOA system. It stands up to the KOA sites near Yellowstone and the Grand Canyon.”

On “Undercover Boss,” corporate leaders work incognito among lower-level employees to get a different look at their companies. The episode that will air at 8 p.m. Friday features Jim Rogers, chairman and CEO of Kampgrounds of America Inc., a system of franchised and company-owned campgrounds with 486 locations in North America.

Rogers was in New Zealand and unavailable for an interview. Ventura Ranch KOA franchise owner Scott Cory did not participate in the show’s taping but said he is eager to watch the episode.

“I’m anxious to find out what happened. Everybody has been very, very hush-hush. We had no idea they had been checking on us. They sure know how to do their disguises,” Cory said. 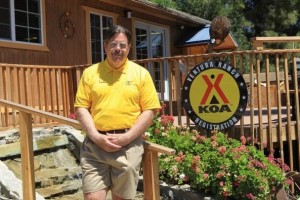 Carlson said the results of the undercover assignment are kept quiet until the show is broadcast.

“We make the show, and the companies need to take a leap of faith,” he said. “They are brave enough to do the show, going on an undercover journey. They know they’ll hear from employees with an unfiltered lens to see what’s working or not working.”

Cory said he hopes the show will reflect the uniqueness of the Ventura Ranch KOA campground, which has hiking trails through the Santa Paula River and Los Padres National Forest.

The campground used to be a county park but went private 30 years ago, Cory said. KOA took it over as a franchise and has spent $1.7 million in improvements. Campground options range from primitive sites to deluxe lodges, and activities include a giant jumping pillow and dual zip line.

Cory, of Thousand Oaks, said he bought the franchise with partner Steven Bitter, of Westlake Village, after working at the KOA corporate offices.

“I saw this campground, and it had great bones. It was in great disrepair and needed a lot of capital improvements so I left corporate work to become franchisee,” Cory said.

The KOA Ventura Ranch campground has had visitors from 26 countries and 48 states.

“We’ve seen tremendous growth in the local community. Business has been fabulous,” Cory said. “We have scouting groups coming in very strong — Boy Scouts, Girl Scouts and Cub Scouts. Family reunions and weddings have become a popular part of this campground.”

The site’s proximity to Los Angeles International Airport and beaches contribute to that success, he said.