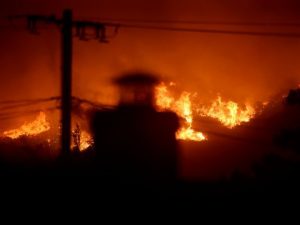 The Thomas Fire burns in the hills near Steckel Park in Santa Paula on Monday (Nov. 5).

The Ventura Ranch Kampgrounds of America (KOA) in Santa Paula, Calif., was evacuated Monday (Nov. 5) evening as the Thomas Fire continued to gain steam, according to the V.C. Star.

No damage has been reported at the campground, but Ventura County Fire Captain Stan Ziegler said that rural homes in the Steckel Park area have also been evacuated.

The blaze quickly gained steam on Monday evening, growing to a size of between 8,000 to 10,000 acres by 10 p.m., with at least one person confirmed killed in a crash within the fire’s perimeter.

Rich Macklin, a spokesman for the Ventura County Fire Department, said some water-dropping helicopters were flying overnight. Officials hope to have more in the air soon, but that will depend on wind conditions.

“I personally have never seen structures destroyed in Ventura County like this. We’re doing everything we can to keep in front of this thing,” Macklin said.

By Tuesday morning the fire had burned 31,000 acres and destroyed 150 structures.

The Red Cross said an estimated 500 to 600 residents had checked into the shelter at the county fairgrounds by early Tuesday morning. That’s more than was initially expected and a second building was opened.

In Ojai, about 40 people were at the shelter in Nordhoff High School.