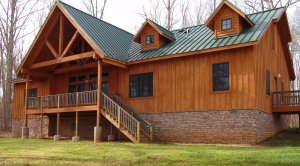 Two Virginia state parks — Lake Anna and Caledon — are expanding their services for campers, the former adding new six-bedroom cabins and an active mining experience and the latter putting in rustic tent-camping sites for those who hike or paddle in.

At the park on Lake Anna in Spotsylvania County, the big news is the addition of two large cabins to join the 10 others along Pigeon Run Creek in the park, the Free Lance-Star, Fredericksburg, reported.

Park manager Doug Graham noted that the General Assembly this year approved spending more than $7 million to upgrade cabins and other facilities at a number of parks around the state.

Included in that was money for two large cabins at Lake Anna State Park, at roughly $450,000 each, to satisfy demand from families and other groups holding reunions, retreats and other functions.

“They have these at some other parks and they’re very nice, with the six bedrooms, a large central living room and three bathrooms in each,” said Graham.

Graham said he, State Parks Director Joe Elton and others recently scouted sites near the other cabins and found two likely spots, one on the waterfront and one just up the hill from that.

The parks’ planning and construction folks are just getting started on the project. Graham expects the new cabins to be finished and available sometime in the next year or two, depending largely on how long the planning process takes.

“We have a big demand for something larger than the two-bedroom cabins we have now,” said Graham, who noted that groups and large families will frequently rent out eight or more of the two-bedroom units to get capacity they need.

While those two new additions won’t arrive for awhile, a Lake Anna Mining Company sluice at the park has provided fun for visitors all summer.

It’s a neat, miniature mining experience on the porch of the park’s renovated visitor center. Visitors can use a passing stream of water and plastic pans to find minerals and other glittery objects from bags of sand purchased there.

The bags range from $5 to $20 each, depending on whether the purchaser wants to pan for fossils, glittery stones or other minerals.

Chief ranger Bryce Wilk said the sluice has been popular this summer and that that it will be available daily through this weekend, and then on certain days in the fall or by special request.

At Caledon, a team of Youth Conservation Corps workers this summer helped put in the first campsites in the nature park along the Potomac River in King George County.

Chief Ranger Sammy Zambone said the team of young people who spent the better part of two weeks in Caledon built four sand-filled, timber-encircled tent pads along the river. He noted that staffers will complete two more, as well as other needed features.

The campsites, which will require visitors to bring in their own drinking water, will be available by reservation only to campers who paddle canoes or kayaks to the site, or hike in from existing parking areas.

The small boats anticipated to bring in some campers can land on the small beach near the campsites, which are also close to Jones Pond.

The campsites currently have a portable toilet. Plans call for it to eventually be replaced by a composting toilet.

At that point, sometime this fall, the campsites will become available through the state parks’ reservation line: (800) 933-7275.

At both Lake Anna and Caledon, there may also be new wrinkles coming in future years.

At Lake Anna, Graham said the recently updated park plan calls for a new visitor center and perhaps an amphitheater to be built on a currently empty 85-acre tract near the park beach that was purchased several years back.

And at Caledon, there are plans for 10 to 15 more limited-access campsites in future years, probably closer to the visitor center than the six new ones along the river.