The writings of Wally Byam, founder of Airstream and legendary RV traveler who died in 1962, are being revived in this, the centennial year of the RV industry.

Rich Luhr, publisher of Airstream Life, has combined the popular works of Byam, “Fifth Avenue on Wheels” and “Trailer Travel Here and Abroad” in a single reprint titled “The Byam Books.”

The book can be obtained only through the Airstream Life online store at present: www.airstreamlife.com/store.

Dale “Pee Wee” Schwamborn, Byam’s cousin and frequent traveling companion, was invited to write the forward to the reprinted work.

Schwamborn, now 71 and living in Dewey, Ariz., told WOODALLSCM.com, “For too many years the writings of Wally Byam have been out of print. Wally conducted worldwide Caravans for Airstream owners. (Canada, Mexico, Central America, Cuba and Africa.) Airstream has become a legend, an icon, and the most recognized RV/trailer on the highways and byways of the world.”

His forward to the reprinted book follows (the photographs are from various archival collections of Byam memorabilia): 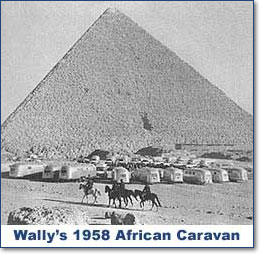 “To Pee Wee, who accompanied me on my First and Last Caravan. Wally Byam”

Wally wrote this in my first edition of “Trailer Travel Here and Abroad.”

In 1951, Wally gave me the nickname, “Pee Wee.” He also invited me to travel with him on his first Caravan to Mexico and Central America. Wally’s last Caravan was to Africa in 1959. The trek went from Cape Town, South Africa, to Alexandria, Egypt. I assisted Wally as the Advance Scout on this final Caravan. My nickname has endured since 1951, and is my personal synonym for Airstream, the Wally Byam Caravan Club, and having fun.

Wally Byam surrounded himself with affirmations. He did not just talk the talk, he truly walked the walk. When he was 21 years old (in 1917), he wrote this defining, prophetic statement:

“I am a man of extremes — either I will be a big boss, a rousing success, or a blank failure. In my heart I know I’ll be a great big glorious success, and that my name will go down in history.”

Wally Byam understood his personal power to achieve. He found his niche in the manufacturing of the Airstream trailer, the development of Caravans traveling the highways and byways of the world, and his 100% support of the Airstream owner’s club, the Wally Byam Caravan Club.

“Remember — if you want a thing bad enough you’ll get it, if you work hard enough.”

Wally’s path through his life was never easy. He did advertising work with his friend Cornelius Vanderbilt, Jr. and the Los Angeles Times. When the radio was in its heyday, he published a trade publication glorifying the radio, and its manufacturers.

When our nation was in the Great Depression, Wally did the unimaginable: he formed a recreational vehicle company to manufacture travel trailers. Our Airstream trailers began in dire times. But Wally was a true Renaissance man, equal to the challenge. He was an entrepreneur, engineer, production line worker, salesman, lecturer, owner, supervisor, accountant, purchasing agent, friend, dancing partner, sailor, teacher, conservationist, historian, leader and husband.

No one ever worked harder to serve his employees, owners, and friends.

“I just hate the idea of being a business man or running a big mill or anything like that. I do not know whether to make myself like that kind of life or become a beachcomber, as in the play. One way gives me success, renown and prestige, and the other gives me happiness. Which shall I choose?”

Wally Byam became a manufacturing beachcomber. He made a product from his love for travel and camping. It allowed him to go when and where he wanted by giving him the freedom of a beachcomber. He willed this spirit to his Airstream owners. He did it through firsthand experience with many Wally Byam Caravans, and with the publications of “Fifth Avenue on Wheels” and “Trailer Travel Here and Abroad.”

At age 23, Wally wrote, “There is no use of me trying to be a world-beater for the simple reason that I don’t want to be a world-beater. Success is so futile, one strives for mountains and mountains of money and power, which, when attained makes the possessor no happier than before he began, except from the pleasure of doing his work. I do not get pleasure out of purely making money. So what’s the use of trying.”

Wally was never after a bank account. He wanted several things from his endeavors: financial freedom, the best product that could be made, good friends, steady employment for his workers, to be a good husband and, at the end of the day, to know that his work had contributed to these endeavors. Money was only a tool to accomplish his goals, not to create an empire.

Wally Byam (wearing tie at right) joins Nicaraguan dictator Anastasio Samoza (wearing broad-rimmed hat in center) during a caravan through that country in 1951. Dale Schwamborn is the youth standing behind Byam.

Wally Byam (wearing tie at right) joins Nicaraguan dictator Anastasio Samoza (wearing broad-rimmed hat in center) during a caravan through that country in 1956. Dale Schwamborn is the youth standing behind Byam.

Wally Byam had a knack of picking leaders for Airstream. In California, he selected Arthur (Art) Costello to first manage and then become Airstream’s President on the west coast. A good friend from his workdays at Lockheed during the Second World War, was Andrew (Andy) Charles. In 1952, Wally gave Andy the opportunity to go to Jackson Center, Ohio to start up a new Airstream Plant. Wally’s choices made Airstream the company we know today. Andy and Art were sterling leaders, not only for Airstream, but for the entire industry.

In 1955 Wally again had to make a decision. He and Stel (his wife) were going to Europe to scout the 1956 Wally Byam Caravan to Europe. Who could he tap to take over the Caravan to Eastern Canada? He selected his first cousin, Helen Byam Schwamborn, who was my mother. In 1953, Wally had sent Helen a post card. He told her that he would be taking care of her “itchy foot.”

Well, he did. Not only was she selected to lead the 1955 Eastern Canada Caravan, she was asked to work with the Airstream owners in forming a Club. The Airstreamers put together a Constitution, and a club was formed in Kentville, Nova Scotia, Canada in August 1955. She went home to Bakersfield California and opened the WBCC (later WBCCI) Headquarters in our home

Helen later wrote: “He was a man with an amazing understanding of people, their problems, their abilities, and, I might add, their endurance.

“He could throw out challenges faster than they could be picked up. He kept all of those associated with him working beyond their known capacity and accomplishing what they knew full well to be impossible. He had an uncanny way of giving confidence; when he said you could do it, you didn’t question him, you did it. He was an embodiment of the pioneer spirit which gave America its tough fiber.

“I have never worked so hard in my life as I have with Airstream. If I had had any idea of all that was entailed I would never have even dared to try my present job. But Wally said I was the one for the job and I didn’t question him. I guess I was completely brain-washed.

“Whatever happened, I have never had a job so rewarding in so many ways.”

Helen’s congeniality, work ethics, enthusiasm for travel, love for Airstream owners, writing skills, organizational talent, have been not lost to time either. Today her baby, the Wally Byam Caravan Club International, is 55 years old. She assisted Wally in the dream, their dream and yours.

“In the heart of these words is an entire life’s dream. To those of you who find in the promise of these words your promise, I bequeath this creed… my dream belongs to you.”

“To place the great wide world at your doorstep for you who yearn to travel with all the comforts of home.

To provide a more satisfying, meaningful way of travel that offers complete travel independence, wherever and whenever you choose to go or stay.

To keep alive and make real an enduring promise of high adventure and faraway lands… of rediscovering old places and new interests.

To open a whole world of new experiences… a new dimension in enjoyment where travel adventure and good fellowship are your constant companions.

To encourage clubs and rallies that provide an endless source of friendships, travel fun and personal expressions.

To lead caravans wherever the four winds blow… over twinkling boulevards, across trackless deserts… to the traveled and untraveled corners of the earth.

To play some part in promoting international goodwill and understanding among the peoples of the world through person-to-person contact.

To refine and perfect our product by continuous travel-testing over the highways and byways of the world.

To strive endlessly to stir the venturesome spirit that moves you to follow a rainbow to its end… and thus make your travel dreams come true.”