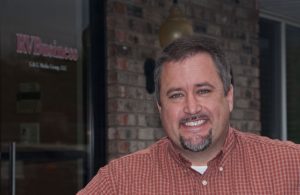 Justin D. Leighty, a 41 year-old Warsaw, Ind., resident and editor of Elkhart, Ind.-based Woodall’s Campground Management magazine, passed away on the evening of June 27 from injuries sustained in a one -vehicle accident on a rural Kansas road where he had gone with his family to help with the wheat harvest at his family farm as he did every year at about this time.

The Kansas Highway Patrol indicated that Leighty, a former reporter for The Elkhart Truth who also served as editor of Midwest Editor of RVBusiness magazine, sister publication to Woodall’s Campground Management, was alone in the vehicle at the time of the mishap.

Leighty, born in Colby, Kan., was a 1994 graduate of Las Animas High School in Las Animas, Colo., and a 1998 graduate of Greenville College in Greenville, Ill., where he earned a mass communications degree. His first brush with the RV business came during his 15-year tenure as a Truth reporter covering everything from the police beat to the Elkhart County 4-H Fair, an impressive event for which Leighty had continued to volunteer his time in a public relations capacity.

He was also known as a devout Christian who was active in the Winona Lake Free Methodist Church, where he volunteered his time in leading the youth group.

As editor of Elkhart-based Woodall’s Campground Management (WCM), Leighty’s primary responsibility was directing and producing the editorial content for the monthly voice of the North American RV park and campground sector.

“Since Justin had joined our staff nearly four years ago, he had grown appreciably into his position as editor of WCM and had become a vital team member – and friend – who shall be sorely missed by all of us,” said Sherm Goldenberg, publisher of G & G Media Group LLC, the Elkhart-based publisher for which Leighty had worked for nearly four years. “He had all the earmarks of an up-and-coming traditional journalist with an eye for both the print and web worlds, a kind of talent that’s becoming more scarce these days as the Internet takes its toll on American journalism.”

Leighty’s also remembered warmly by former peers at the Truth, judging by the comments and Facebook traffic that followed the news of his untimely passing.

“Justin was always professional and covered both sides of a story,” Tyler Klassen, a former staff photographer at the Truth now working on a freelance basis, told RVBUSINESS.com. “And as a political and social conservative, he was a helpful voice in maintaining an essential balance in the newsroom.”

In one of the more memorable Facebook posts, former youth group member Josh Higgins, now a young adult employed in manufacturing, had this to say:

“I had the honor of knowing Justin for well over a decade and I can honestly say that he was one of the best individuals I’ve ever known,” wrote Higgins. “He was exceedingly humble and hard-working. He was always there for anyone who needed help. For years he volunteered his time to help with the youth group at church. His wisdom and willingness to listen helped many of us from those groups through the trials of our teens and beyond.

“His wife, Crystal, and their three daughters were the loves and pride of his life,” added Higgins, “and he was the type of husband and father that all men should aspire to be. Above all, he was a man of God. You could see the love of Christ in everything he did.”

Leighty, born June 19, 1976, in Colby, Kan., is survived by his wife, Crystal; their three young daughters, Sydney, Macy, and Chloe Leighty, all of Warsaw, Ind.; parents, Dale and Verna Leighty of Las Animas, Colo.; and two brothers, Quentin and his wife, Angela Leighty of Monument, Colo., and Brian and his wife, Brooke Leighty of Dighton, Kan.

Leighty will be laid to rest July 1 in a family plot alongside his grandfather in Buda Cemetery in Ness City, Kan. And there will be an open-to-the-public memorial service at 10 a.m., Saturday, July 8, at the Winona Lake Free Methodist Church, 902 College Ave, Winona Lake, Ind. Memorial contributions may be given to the Juvenile Diabetes Research Foundation. Arrangements are being handled by the Fitzgerald Funeral Home in Ness City, Kan.