WCM Examines Alcohol Use at Campgrounds 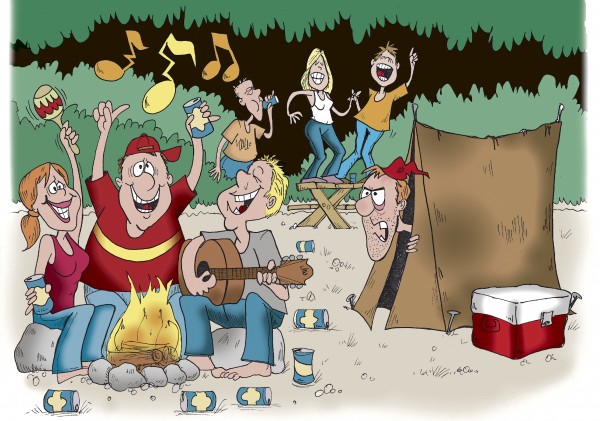 Most public and private park operators have run-ins with them from time to time. Despite posting rules and regulations warning that intoxicated and unruly guests will be thrown out, of course, they still show up, regardless of whether a park sells alcohol or not.

The problems can become even more complicated – and bring potential insurance liability exposure – if the intoxication occurs as a result of alcoholic beverages purchased at the campground store or offered to guests at a campground-sponsored event. Liquor liability coverage can provide critical coverage in these kinds of situations.

Fortunately, for the mainstream RV park and campground arena, such incidents are relatively rare. But when guests become inebriated – more than just a little silly – they not only pose various insurance risks, but they may also disturb other guests with their behavior or, worse yet, pose life-threatening risks or threats of bodily harm to campers and park managers alike.

The most notable incident last summer involved a fatality at a campground in Minnesota when a woman backed a vehicle over a tent on July 5 at Beaver Falls Park in Renville County, killing 3-month-old Whyatt Sander and injuring his 21-year-old mother. The driver pleaded guilty to criminal vehicular homicide – causing bodily harm while under the influence of alcohol.

Other recent news reports highlight the kinds of alcohol-related problems park operators and guests experienced over the past year:

Equally striking, as you might suspect, are alcohol-related incidents that don’t make headlines, like the night last summer when a drunken 6-foot, 3-inch, 250-pound biker stormed out of the West Yellowstone KOA camp store after park owner Steve Linde refused to sell him beer. “We have a rule that we don’t sell alcohol after 10 p.m.,” Linde told Woodall’s Campground Management.

Miffed at Linde’s refusal to bend the rules, the drunken biker then jumped on his Harley and revved it up several times, disturbing the slumber of more than 1,000 people at the 360-site campground. When Linde confronted the biker about the noise, he became so hostile that Linde had to douse him with pepper spray. “He was very apologetic when police arrived,” Linde said.

During a family reunion at the same park last summer, three off-duty police officers got so drunk – and noisy – that Linde had to call the police to have them removed from the park. The drunken officers were part of a family reunion involving 50 to 60 people, many of whom were also drunk. Several of these guests later retaliated by posting negative comments on TripAdvisor.com and other websites saying that Linde’s park was “too strict.”

Linde, however, has no apologies. He claims that park operators have no choice but to remove drunk and unruly guests from their parks. “If you have got 1,000 people sleeping at your campground,” he said, “two guys making noise are not worth it.”

In fact, excessive noise is the No. 2 complaint involving campgrounds and RV parks nationwide, right behind complaints involving the condition of the campsite or rental unit, said Bob MacKinnon, a consultant and former Disney Company executive who runs the GuestReviews online survey program for the National Association of RV Parks & Campgrounds (ARVC).

While “excessive noise,” as defined in the GuestReviews surveys, is not solely attributable to alcohol-related noise, noise complaints can also involve loud vehicles, parties or simply people talking too loudly. In any event, MacKinnon said it’s safe to conclude that alcohol is a factor in many noise-related complaints.

Fortunately, incidents of guests becoming both drunk and unruly are relatively rare in good, professionally run parks. And complaints of any kind are relatively infrequent. In fact, of the 50,000 guest surveys MacKinnon has collected during the past two summers, fewer than 4,000 guests reported problems of any kind during their stay.

And while it’s tempting to say ‘Beware of bikers and off-duty cops,’ park operators say it’s dangerous to stereotype anyone because alcohol-related problems can involve anyone. “Sometimes, the problem is with Grandma and Grandpa and not four or five college age guys with surfboards,” said Clint Bell, who owns the KOA campground in San Diego, Calif.

Linde, who has worked at campgrounds since he was 9 years old, encounters only one or two alcohol-related incidents per year at his family park in Montana. Other park operators contacted by WCM also said incidents involving drunken guests are rare at private, family-oriented campgrounds as well as at upscale parks that cater to seniors.

David Gorin, a campground industry consultant who owns Holiday Cove RV Resort in Cortez, Fla., and promotes upscale parks through his Best Parks in America marketing network, sees a correlation between the caliber of park and the type of guests they attract. “I think the problem is directly related to the type of park, the pricing and resort quality,” he said. “It sounds like stereotyping, but the nicer the park in terms of facilities, amenities and landscaping, the tighter the restrictions on unit types and the higher the fees, the better the clientele and the (fewer) behavior problems of all kinds.”

That’s not to say that higher quality parks have no problems, Gorin said, because behavioral problems occur throughout society. Whatever type of park it is, he suggests, parks should have policies and procedures in place to deal with these kinds of situations so as not to negatively affect other guests’ experiences.

Make Sure You Have

Many, in fact, do have alcohol policies in place, which are often posted on park websites along with their rules and regulations. But park owners also say it’s not enough to simply have policies in place. Robert Adams, owner of Gettysburg Campground in Gettysburg, Pa., also said one cannot assume that lower-priced parks are more likely to have alcohol-related problems, either. “There are many fine campgrounds that do not charge a lot and are great family places to be,” he said.

“If you have policies, you have to enforce them actively and quickly,” Adams said.

Parks that consistently enforce their alcohol-related policies will get a reputation for doing so, which can only help them in the long-run, explained Kelly Jones, director of franchise development for Milford, Ohio-based Leisure Systems Inc. (LSI), which franchises Jellystone Park Camp-Resorts.

Park operators and consultants have tactics they recommend, in fact, to keep alcohol-related problems to a minimum: