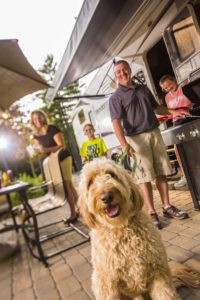 More and more campers are bringing along their pets when they camp.

As the camping arena begins to see a rise in interest from people that come from all walks of life, campground owners are reporting that more and more campers are bringing along their furry family members.

The 2018 Kampgrounds of America (KOA) North American Camping Report highlights this trend, stating that 20% of campers in 2017 considered whether a campground allowed pets or had a pet area as a top five consideration in selecting a campground. That is up 1% from 2016, but still a slight drop from 22% in 2015.

Experts in the campground arena; however, say that the trend of bringing along pets while camping is going to continue to grow.

“TripAdvisor did a survey recently and it stated that 52% of people actually do travel with their pets and about the same amount of those folks are actively searching out pet-friendly lodging areas where they can stay with their pets,” said Nora VandenBerghe, sales, marketing and operations manager at Seattle, Wash.-based Dog-On-It Parks. “So, I think that translates to campgrounds and RV resorts moving to capture the market segment. In the last five to six years we have definitely seen an increase in the work campgrounds and resorts are doing to help cater more towards people that are traveling with their pets.”

Bob Hansen, national account and marketing manager at Eclectic, Ala.-based Pet and Playground, said that it makes financial sense for campers to take along their pets.

“My family travels with three dogs when we camp and a lot of people do that, because what are you going to do? It’s $40 per dog, per night when you leave them behind (at a kennel),” he said. “I’ve got a 40-foot fifth wheel and what I am seeing across the areas that we camp, which is mostly throughout the southeast, is more and more trending towards having off-leash dog park areas, because probably 60% of all the sites have a dog on them.”

Dave Canning, who owns Orlando, Fla.-based DOGIPOT, said that amenities for pets, specifically those used for dog parks, is one of the fastest growing segments in the parks and recreation industry.

“Dog parks have been around for quite a while, but a lot of times it was a fence and maybe a pet station and you maybe throw a bench in there for someone to sit on,” he said. “Now, people want a lot of fun things for their dogs to do. They want some agility equipment, some stuff their dogs can climb up and down on or go under or some shading systems.”

It is not just about having an area for dogs to roam off-leash, Vandenberghe said that campers with pets are looking for a truly pet-friendly environment.

“There is a pretty big difference between just allowing pets and being pet friendly, and from a business and marketing perspective, if those campgrounds and RV parks are being truly pet-friendly they are offering on-site amenities, anything from dog park agility equipment to special events in those dog parks,” she said.

Hansen said that campground owners and managers need to be cognizant of what the demands are and meet those demands.

You can read more on this story in Woodall’s Campground Management’s May issue.