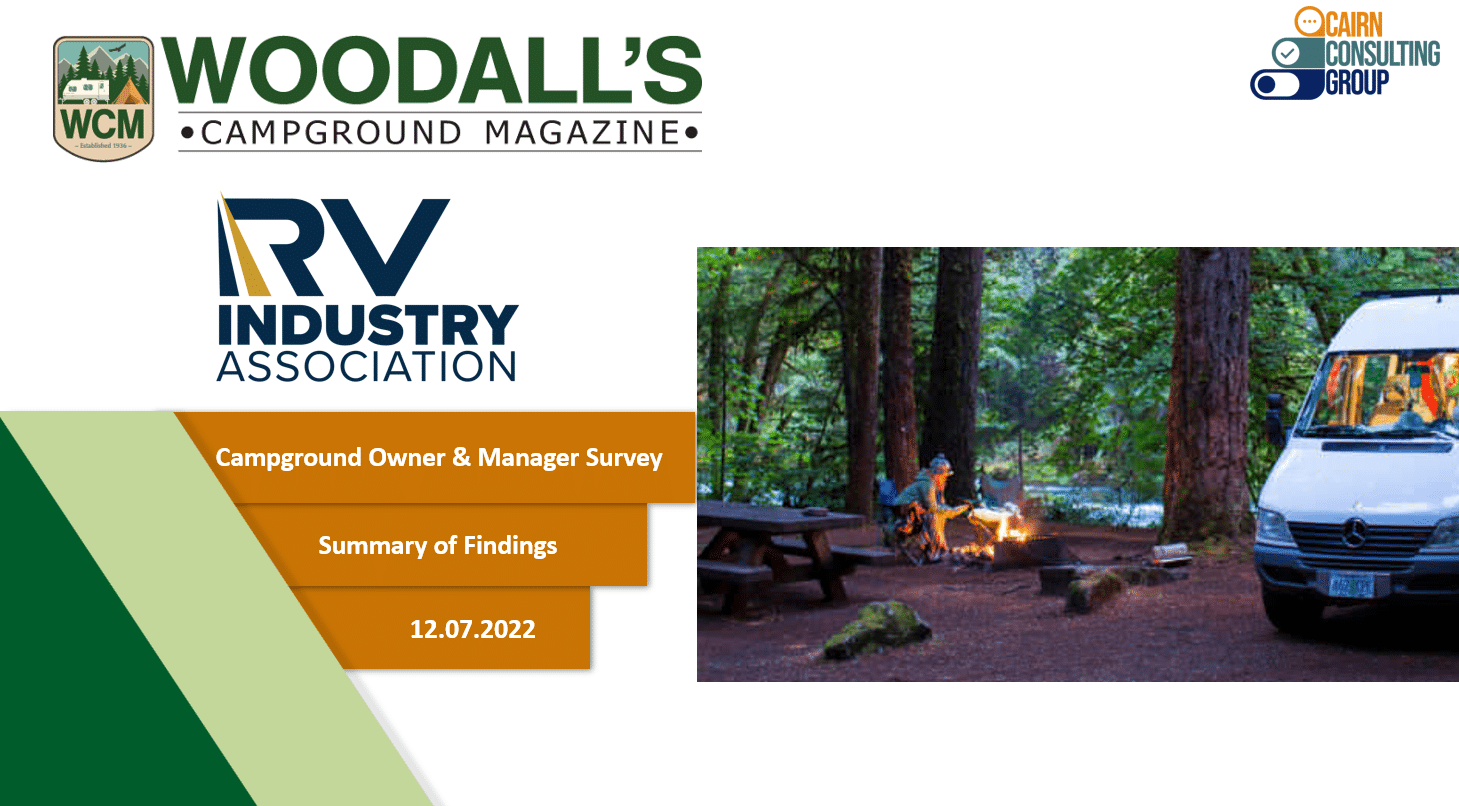 The outdoor hospitality industry continues to fire on all cylinders, according to a Campground Owner & Manager Survey conducted by Woodall’s Campground Magazine (WCM) and sponsored by the RV Industry Association (RVIA).

“Looking ahead to 2023, about 7-in-10 park owners are planning some type of site, accommodation and/or amenity improvement to their parks,” notes one of the key findings of the survey.

The survey also noted that more campsite development is needed as demand continues to outpace what the market has to offer.

“Some of the results from this inaugural survey were predictable,” noted Ben Quiggle, WCM’s editor. “The industry has been hearing about the lack of campsites for years now. But I think some of the operational issues identified in the survey are interesting. Including the fact that parks need help with marketing and better access to financing.”

The survey was conducted by Scott Bahr, president of Cairn Consulting Group, and Billie McNamara, a research consultant at the firm and manager of Loon’s Haven Family Campground in Naples, Maine. WCM plans to conduct the survey on an annual basis.

It noted that one-third of parks overall, including about half of smaller parks, say that having the capital for improvements is the primary resource they need for 2023. Other operational needs include emergency preparedness resources, text messaging services for guests, employee training and marketing help. The survey notes that small parks have 100 or less sites, mid-sized parks include 101-200 sites and larger parks have 200-plus sites.

Among the few who mention the negative impact of “new campers,” the most likely comments include that the set of “new campers” has a sense of entitlement, they don’t know the rules or want more amenities without having to pay for them.

One survey respondent commented: “These new campers came with an entitlement. They had no camping experience, didn’t respect the other guests or the park, felt they could make their own rules and didn’t have to follow ours.”

“While new campers have been a boon for park owners, they also have brought on unique challenges,” explained Quiggle. “Many park owners enjoy having new faces at their parks but hiring issues and the fact that many new campers need extra assistance when pulling in for the first time have definitely put more work on the laps of park owners.”

Looking at the resources park owners wish they had over the past year, more staffing was at the top. Like most industries, the outdoor hospitality industry has had to deal with a large shortfall in employees, leaving many park owners shorthanded during the busiest times of the year.

As park owners began to look ahead to the 2023 season, many identified improvements they worked on this year and projects they are looking forward to in 2023.

Full hookup RV sites continue to be the bread and butter of the industry, with parks adding 11 on average over the past year. 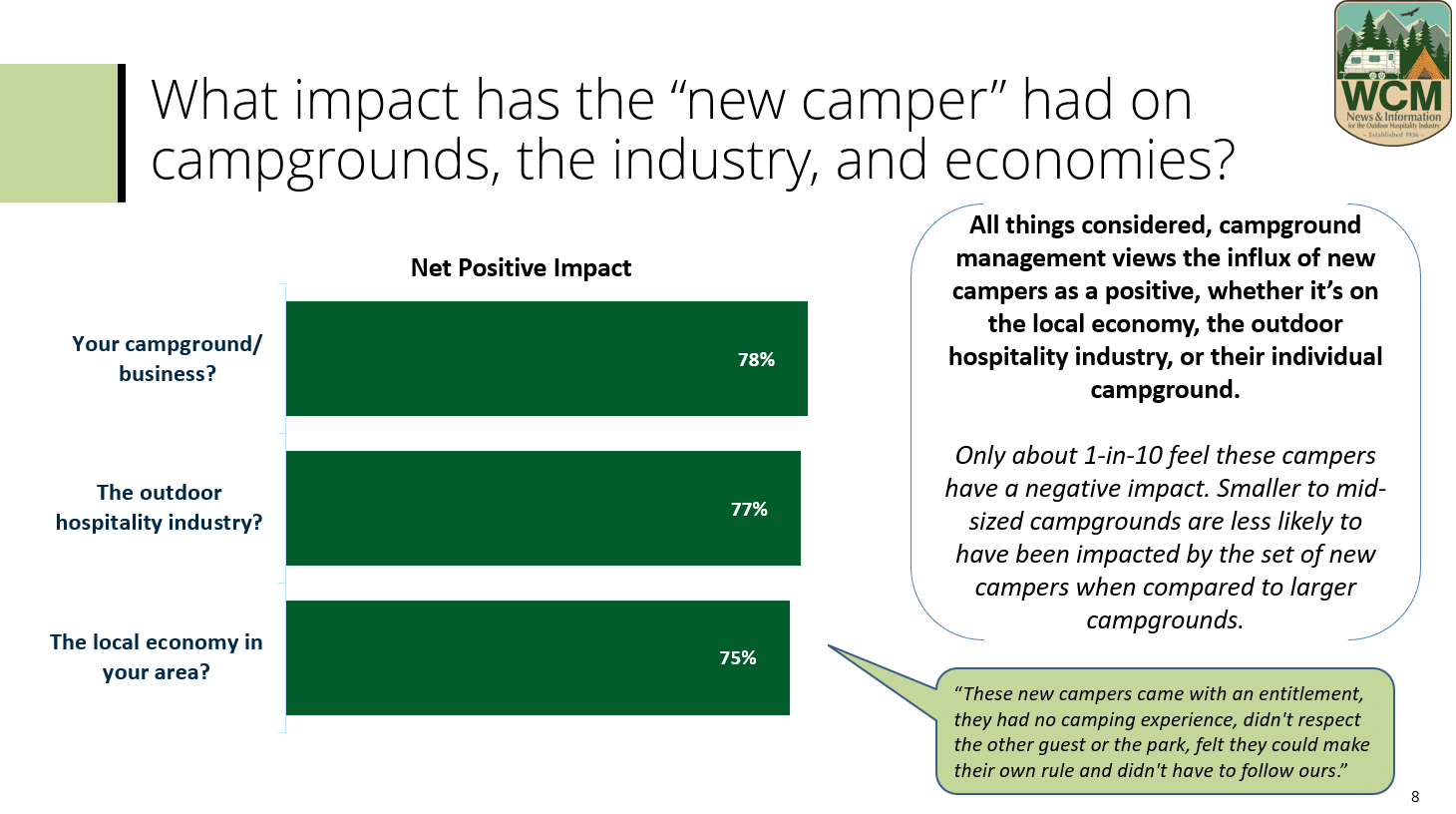 Other Key Stats from the Survey

Length of Stay: When asked about the length of stay, almost two-thirds of campground owners/managers would prefer a four-to-seven-night stay, which is well above their typical guest who stays only two to three nights.

Desired Campers: In general, campgrounds appear to be attracting the types of guests they prefer, which include a higher percentage of couples with children and a split of small- and mid-sized groups.

Are Major Changes Coming: Campground owners/managers are generally unlikely to seek major changes in the coming year, whether it’s opening a new park, selling their current park or acquiring a new park. Still, about a third of the owners surveyed are either open to or uncertain about whether they would sell their campground.

“I think overall the survey shows that park owners/managers face many challenges as they look ahead to 2023, but the industry is in a prime position to still thrive in the new year as many park owners look forward to adding more amenities and accommodation units,” explained Quiggle. “It is great to see the optimism that many park owners share and the investments that they are ready to make in their businesses.”

Methodology: Respondents were encouraged to give their thoughts in numerous areas, from areas they felt they were lacking in, to strengths in their businesses, trends and more. Nearly 500 surveys were returned and park owners from 41 states participated.

You can read the full survey below or download it by clicking here.