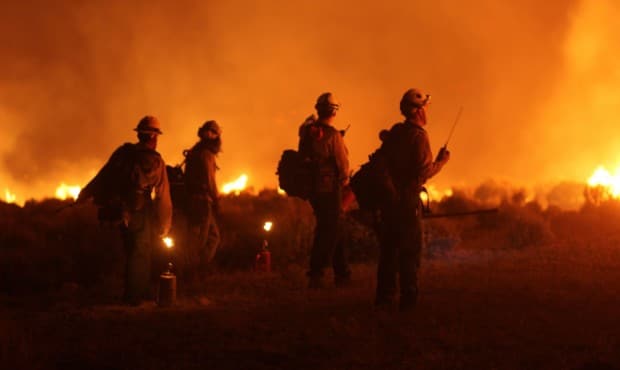 Wildfires prompted evacuations in Utah, Nevada and Arizona over the weekend, according to the Claims Journal.

Fireworks caused a wildfire in Utah that forced out residents of houses and an apartment building early Sunday (June 28) as the flames encroached on a residential area, officials said.

A suspect was cooperating with law enforcement, Utah Fire Info said in a tweet. Strong wind gusts had been reported in the Lehi area as the Traverse Fire grew to more than 500 acres by 7 a.m. Sunday morning, the agency said.

Photos showed the fire erupting in the background of a residential area and behind a large church. Evacuations were ordered in Lehi and Draper, but some residents who evacuated were later allowed to return.

About 20 homes were in imminent danger when crews first arrived. Early morning rain helped tamp down the flames and no structures were considered threatened by mid-morning on Sunday, Lehi Fire Chief Jeremy Craft told KSL-TV.

A high school gym in Lehi and a middle school in Draper were offered as shelters, according to tweets from the cities.

No injuries and only minor structural damage were immediately reported, and The Red Cross said the Draper shelter was being closed because it had no evacuees

Dangerous fire conditions were forecast for Sunday afternoon through Monday across parts of Utah. Wind gusts of up to 50 miles per hour and low relative humidity levels would mean any fires that started could rapidly spread.

Rocky Mountain Power tweeted that about 7,500 customers lost power. Draper said around 6,000 of its households were in the dark.

Lehi is about 28 miles south of Salt Lake City.

A wildfire northwest of Reno has burned nearly 5 1/2 square miles of grass and brush as of Sunday with about 400 people remaining evacuated.

The Poeville Fire was 10% contained but authorities say eight structures have been destroyed including a few homes and some outbuildings.

Truckee Meadows Fire Protection District officials say the blaze was burning on the east side of Peavine Mountain and its cause was under investigation.

They said dozens of structures in the Seneca Drive neighborhood were threatened before residents were evacuated Saturday evening.

Southern Washoe County remains under a red flag warning until 11 p.m. Sunday due to gusty winds and dry conditions.

A federal incident management team was expected to take over the fire at some point Sunday, bringing in more firefighters and resources.

An evacuation notice was issued Saturday for a sparsely populated rural area northeast of Tucson because of a wildfire burning brush in a desert valley after coursing across the Santa Catalina Mountains.

There are about a dozen homes in the Redington area covered by the evacuation notice, Pima County sheriff’s Deputy Marissa Hernandez said.

There were no reports of structure damage or injuries, she said.

The fire swept across and crept over steep ridges and forested peaks in the Catalinas before descending to generally flatter terrain in the Redington area..

Started June 5 by lightning, the fire has forced several evacuations, including one still in effect for Summerhaven, a community on Mount Lemmon.

The fire has burned 149 square miles (385 square kilometers) and was contained around 40% of its perimeter as of Saturday.

Nearly 1,190 firefighters and other personnel supported by air tankers and helicopters were fighting the fire.