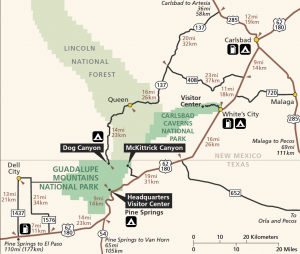 This map shows the location of several areas in west Texas and southeast New Mexico where fire threat is high.

A combination of lack of moisture and unseasonably warm weather in far West Texas and southeastern New Mexico has prompted Guadalupe Mountains National Park fire officials to join the neighboring Guadalupe Ranger District of the Lincoln National Forest in elevating the park’s fire danger rating to HIGH, according to a news release.

The rating helps describe the general conditions over an extended area. The HIGH rating indicates that all fine fuels, such a grass, can ignite easily and fires can start quickly from most causes; fires can spread rapidly and short-distance spotting is common; high intensity burning may develop on slopes or in concentrations of fine fuels; fires may become serious and their control difficult unless they are attacked successfully while small.

High winds are predicted for this weekend which has prompted the need for heightened awareness about the local conditions and increased potential for wildfires.

Previous years, including 2010 and 2011, experienced similar conditions, which led to the start of early fire seasons. In 2011, large fires were being reported in February and the fire season continued through August.

“This is looking to become another extended fire season, mostly due to the lack of moisture, and the likelihood of little, if any, significant moisture between now and spring. We may be responding to wildfires during winter and early spring” stated Art Arias, Fire Management Officer for the Guadalupe Ranger District of neighboring Lincoln National Forest.

Guadalupe Mountains National Park Superintendent Dennis A. Vásquez echoed “We expect a series of red flag warnings for the region in coming weeks and months, and, are preparing for another long fire season throughout the region, this year. We strongly urge visitors to take necessary precautions against igniting a fire and to report any signs of fire to park staff immediately.”

Park officials are asking everyone to be vigilant and help minimize the risk of wildfire by following some simple tips: