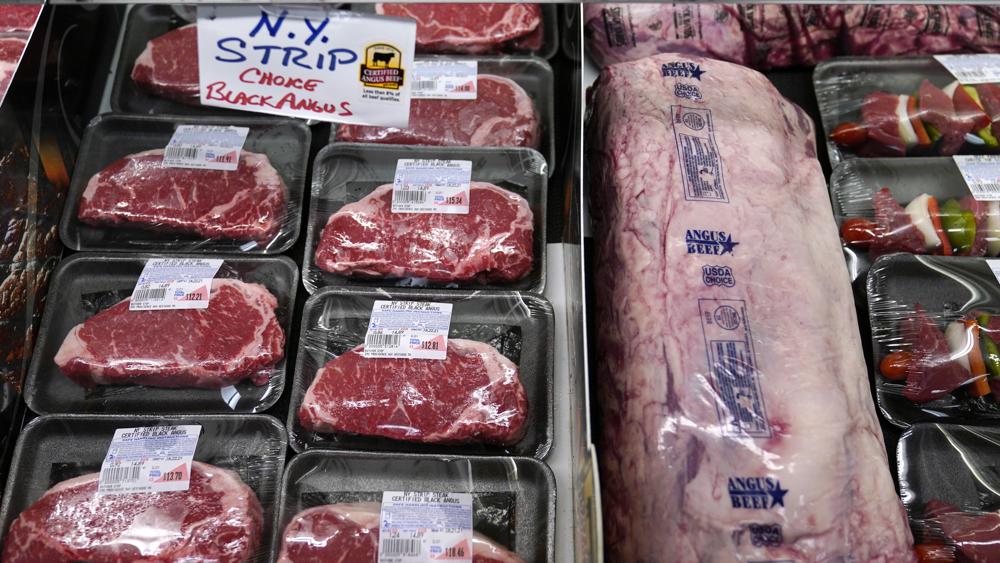 In this Tuesday, June 15, 2021 photograph, beef is displayed in the meat department at Lambert’s Rainbow Market, in Westwood, Mass. Prices at the wholesale level surged by a record 9.6% in November 2021, from a year earlier, an indication of ongoing inflation pressures The Labor Department said that its producer price index, which measures inflation before it reaches consumer, rose 0.8% in November compared to October, the highest monthly reading since June. (AP Photo/Charles Krupa)

Prices at the wholesale level surged by a record 9.7% for all of 2021, setting an annual record and providing further evidence that inflation is still present at all levels of the U.S. economy, according to an Associated Press report.

The Labor Department reported Thursday that its producer price index, which measures inflation before it reaches consumers, did slow on a monthly basis rising just rose 0.2% in December compared to November when prices had shot up 1%.

The 12-month increase in wholesale inflation of 9.7% was also lower than a revised 9.8% increase for the 12 months ending in November. However, the government uses the December to December change for the yearly increase and on that basis the 9.7% rise was the fastest annual jump on record, far above the 0.8% increase in 2020 and the 1.4% rise in 2019.

Thursday’s report came a day after the government reported that consumer inflation jumped 7% in December from a year earlier, the highest such inflation rate since 1982.

The price increases at both the wholesale and retail levels have been attributed in large part to snarled supply chains at a time of surging demand. President Joe Biden’s approval ratings on the economy have taken a hit because of the surge in prices, especially for consumer necessities like food and energy.