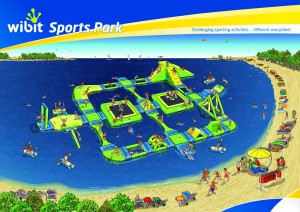 The new German-designed Wibit Sports Park was created to give commercial pools, resorts and campgrounds a modular floating playground that’s worth paying for, according to a news release.

With the ability to actively entertain up to 75 kids (big and small) at a time, some public resort managers are charging between $3 and $5 per half-hour session and it’s an attraction that keeps them coming back for more.

The modular interlocking design of the Wibit Sports Park allows it to be configured in almost infinite combinations. The trampolines are traditional favorites but the new Tarzan Swing — the world’s first floating swing — along with the four-sided Tower, which includes a super-sized slide, diving platform, rope climb and wall climb all in a single product, are becoming equally popular. 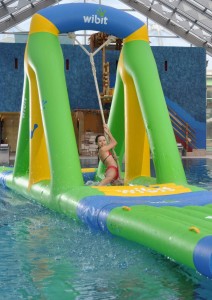 “A variety of games and events have been designed around Wibit’s products to promote social interaction, balance, coordination and motor skill development for children of all ages,” said Robert Cirjak, Wibit vice president of kinetics, “something that is sadly lacking in today’s electronic world.”

All Wibit products are built to conform to or exceed the tough TUV safety and quality standards — like the reinforced four-layer PVC welded seams found throughout the product line and the intelligent flap and connector strap system that allows for quick set-up while preventing any entrapment between the modules.

“We elected to engineer our products for permanent inflation and to construct them from puncture resistant 32-ounce Denier PVC vinyl. It’s just stronger and safer,” said Romann Rademacher, Wibit founding partner and president. “The constant electric pump is an unnecessary hazard in a wet environment”

Wibit will be exhibiting at the NRPA Congress and Exposition in Minneapolis Oct. 25-29. More information can be found at www.wibitsports.com.