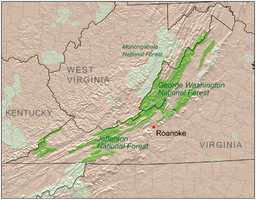 “The fire is still very, very active,” she said. “We have absolutely no estimate on containment or percentage contained or any dates [for containment].”

Blustery winds Sunday and Monday were helping the fire spread.

“The winds were very erratic,” Bushong said. “They would kind of change direction and they would gust.”

A helicopter was going to try to map the fire perimeter by using global positioning satellite technology, she said.

“We really need rain,” Bushong said. “The other problem we’re having is there are fires all across the national forest in the state of Virginia and West Virginia. We’re having a hard time getting resources.”

In Page County, the Shipwreck Fire has burned more than 600 acres on First Mountain, according to a news release from U.S. Forest Service public affairs officer Michael R. Williams.

That fire is near the town of Shenandoah, and is completely uncontained, the release says.

“A voluntary evacuation is in place for the Shipwreck Farms Area,” it says.

Bushong said firefighters were hoping to keep the blaze from crossing Wolf Gap Road and heading higher up Great North Mountain, but flames could be seen licking close to the road about 2 p.m. as firefighters sprayed water.

Fire trucks from Conicville and Woodstock were seen turning onto Wolf Gap Road to assist. Edinburg Fire Department had also been assisting, as had the Shenandoah County Department of Fire and Rescue and the Virginia Department of Forestry, Bushong said.

While no homes were in danger Monday afternoon, “we have a lot of people who are very, very concerned,” Bushong said.

Among those worried were Sara Addis and Gene Taylor, who live on Millertown Road.

“This is not good,” Addis said. “We could see last night the flames. We could see it red. It was so smoky yesterday afternoon. We were kind of almost afraid to go to bed. From our upstairs bedroom you could really just see the red up there.”

Taylor said he could see “lots of flame” Sunday.

“This is the perfect storm for a fire, the winds,” he said. “We’re worried. That’s a dangerous fire with the wind.”

Forest service law-enforcement investigators were near the fire scene Tuesday.

“Any time we have a human-caused fire, we have law enforcement who investigate,” Bushong said. “They’re specially trained to investigate fires.”

There is a burn ban in effect before 4 p.m., but that wouldn’t have applied to Wolf Gap Campground.

“If you’re in a developed campground, we’ve always said, because it’s a hardened area, it’s OK to have a fire prior to 4 p.m.,” Bushong said.