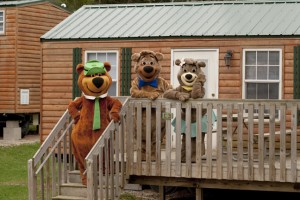 Yogi, Cindy and Boo Boo welcome campers to the cabins at the Jellystone Park in Caledonia, Wis.

Jellystone Park in Caledonia, Wis., will have more cabins to accommodate families this season and an extra special way for those campers to make a splash.

The two-room “Boo Boo’s Basic” cabins sleep six people and feature a full-size refrigerator and a small cabinet area with a microwave. The cabins also have heat, air conditioning and a small porch.

They will be placed on what were previously campsites, bringing the total number of cabins at the park to 25. The family-run park added four of the same basic cabins last year, said part owner and General Manager Bridget Bender, and decided to add four more this year after finding that lots of families really enjoyed the balance they provided. Other cabins at the park offer more amenities, like kitchens and bathrooms, but some families don’t necessarily want or need those things when they go camping, she said.

“We are in an area where people want to take their kids camping, but don’t want the hassle of setting up a tent,” she said. “You don’t feel like you are totally skimping out on tenting, and it is a pretty nice price point.”

Around 6,000 families vacationed at the park last year, according to Bender. The park opens in early May and closes in mid-October.

While parents may be impressed by the new cabins, kids staying at the park this year will surely be excited about park’s new attraction: a towering, looping tube-shaped water slide. The slide will be its own structure, separate from the pool and other water recreation areas. The platform will have one slide, but there is the potential to add another slide to it in the future should the park chose to do so.

“It is kind of like a plunge, you don’t dump out into a pool, you can stand up and walk (when you get to the end),” said Bender of the slide, adding that the cabins and slide should all be installed around the time the park opens.

Caledonia Village President Ron Coutts said Friday the additions to the park should boost the local economy by drawing even more visitors to the park and area businesses. The village will also benefit from the added room taxes generated by new visitors to the park, said Coutts, who sits on the Racine County Convention and Visitors Bureau Board,

“Really this is a positive for us,” he said. “Instead of people going up to the Dells, you get a lot of people coming to Caledonia.”

The park is owned and managed by Bender and her husband, her parents, Randy and Theresa Isaacson, and her two sisters and their husbands. The family took over the franchise in 2005. The park, which is one of roughly 70 Jellystone parks located throughout the United States and Canada, has been in Caledonia for 40 years.