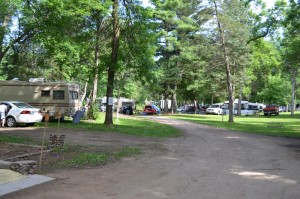 A view of the Apple River Family Campground

Approximately 121 terriers took over the Apple River Family Campground near Somerset, Wis., on Sept. 10-11 for the Arctic Blast Terrier Trials.

“This has been our biggest year ever,” Brenda Buckles, one of the organizers of the event, told the New Richmond News.

The trials are a nationally recognized event for Jack Russell terriers and other working terriers, which feature races, barn hunts and obedience competitions.

Prior to moving to Somerset, the trials have been held for the past 15 years out of Burkhardt and Glenwood City.

Buckles and her co-organizer, Marlene Schmitt, had been preparing for the event for several months. People come from as far away as Illinois, Kansas, Missouri and Canada to participate.

“Jack Russell owners are more in touch – we hear things through the grapevine and through other breeders,” said Barbara Bollom, of Farmington, Minn. She was at the event with her 2-year-old terrier, Tori. They had been competing for 18 months.

“Once you go the first event, you’re hooked. The dogs love it.”

The trials started with a 200-foot fenced-in run. Six terriers at a time were loaded into metal corral on one end; a fenced in circle accessible only by a small opening stood at the other end. Six people were waiting inside the circle to catch the terriers after they run through the opening.

The terriers wiggled and squirmed with anticipation as their owners loaded them into the separate compartments in the metal corral. They were so anxious to get running that they were slamming the walls and pawing at the doors.

Once they were loaded, Buckles held her arm up to signal the start. The door swung upward and the dogs exploded from their corral. Brightly colored fabric collars were on their necks to distinguish placement. Muzzles were also in place for the safety of the handlers at the end of the run.

A piece of fur on a long string served as a “lure” to get the dogs to run the entire length. The opening was padded, which was a good thing since only one dog could get through at a time. Solid thumps were heard as the fast-moving dogs vied to get inside the opening.

Inside the circle, six adults were poised and waiting. The opening looked as if a doggy dam had broken as muzzles, colored collars and tails blurred together. The adults raced around trying to grab the excited dogs, which seemed to twist and squirm away as quickly as greased piglets.

Adding to the cacophony, the other terriers in the wings yapped up a storm during the races. Those on leashes pulled against their owners trying to get toward the running. Others that were confined to their pet carriers knocked against the sides so the thumps were visible against the plastic.

Oliver, a little 4-year-old Yorkshire terrier with a blue barrette on his head, stood on the sidelines yipping and acting as if he were being drawn to the race site by a force beyond his control.

“We’re lucky they are letting other terriers come here,” said Lindsey Decker, of Rochester, Minn. She and her husband, Rick, have three dogs: Oliver, another Yorkshire, and a Jack Russell.

“This is the first time we are in competition here,” said Decker. “Oliver wants to do everything because, as you can see, he is so into it.”

Indeed, after the Jack Russell terriers all ran, the colored terriers were allowed to race.

The day continued with the Child and Youth event, go-to-ground, barn hunt and lure coursing.